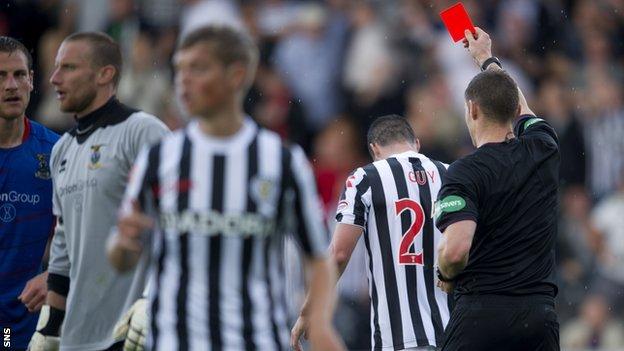 Guy, who scored earlier in the 2-2 draw, was sent off after trying to get the ball off Ross Draper in the wake of Darren McGregor's injury-time goal.

"Lewis is trying to get the ball back for the right reasons," Lennon told BBC Radio Scotland.

And Butcher added: "The player's made contact more with the ball."

It could be a very exciting SPL this season

The sending off for violent conduct was the final significant incident in an eventful Scottish Premier League match, which also featured goals by Nick Ross and Billy McKay.

"I can only go on the information that the players have given me," said Lennon.

"Seemingly, the Inverness player had the ball under his arm. The boy's holding on to it and Lewis allegedly punches the ball out of his hand. I wasn't looking at that phase of play at the time.

"It was a great start to the campaign. There was everything in that game; four quality goals for the fans and a sending off."

Butcher was also keen to emphasise the quality of the match rather than the controversy at the end of play.

"I didn't see one bad tackle," added the Englishman.

"I didn't see one really bad incident although my players are adament that a fist was thrown in the box when Ross Draper went down.

"I'm pleased that we've got a point, that we're unbeaten but disappointed that we've conceded two goals and haven't won the game.

"If games are like that this season, it's going to be not for the faint-hearted, that's for sure.

"It could be a very exciting SPL this season."