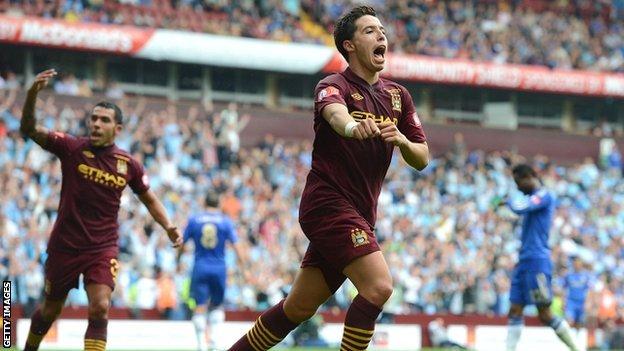 Manchester City signalled their intent for the new season as they held off 10-man Chelsea to lift the Community Shield at Villa Park.

Three goals in 12 second-half minutes by Yaya Toure, Carlos Tevez and Samir Nasri ensured the Premier League champions came from a goal down to win the season's traditional curtain-raiser in a thrilling game.

Fernando Torres had given Chelsea the lead shortly before half-time only for Roberto Di Matteo's side to lose the initiative when Branislav Ivanovic was sent off for a rash tackle on Aleksandar Kolarov moments later.

"This was the day Manchester City sent a message to the rest of the Premier League, a clear signal that the title is very much theirs to give away"

Ryan Bertrand gave Chelsea hope with 10 minutes remaining but City clung on to lift their second trophy of 2012.

This was a rollocking introduction to the next 10 months of drama, disaster, heartache and bluster - a game packed with perspiration and a period of inspiration from City.

The champions were the better throughout, although the dismissal of Ivanovic ultimately shaped the outcome of the game.

For a 10-minute period in the second half, City's attacking play was rapier sharp, their finishing ruthless. Roberto Mancini's men performed with unshakeable belief and eventually found a finishing touch to inflict defeat on a Chelsea team bolstered again by owner Roman Abramovich's millions.

It was not all bad news for Chelsea. Throughout there were signs that Torres was coming to the boil just in time for the new season. Eden Hazard endured an afternoon to forget, tripping over the ball as he attempted a backheel much to the delight of the City fans, but Ramires and Juan Mata provided flair and boundless energy.

But the force was with City, as Mancini's men demonstrated a growing togetherness and maturity.

The swathes of empty seats in all four stands were a reminder that football is, at least for another 24 hours, very much taking second-billing in the national sporting consciousness to the London Olympics. But there was no questioning the commitment of the players.

From the off the challenges were robust and full-blooded, as if a summer of pent-up frustration had been released in 20 thunderous opening minutes. City settled the quicker, with Mancini's decision to experiment with three at the back giving the champions a measure of control in midfield.

Aguero was a constant danger, his runs as sharp and dangerous as they had been in the dying moments of last season, while Nasri probed menacingly.

City might have taken an early lead with Vincent Kompany, Tevez and Sergio Aguero all going close.

But for all City's dominance, Chelsea stood firm to deliver the ultimate sucker punch with five minutes of the first half remaining.

Ashley Cole's hopeful ball should have been dealt with more decisively, but Ramires picked up the pieces 16 yards from goal, jinked beyond Pablo Zabaleta and rolled a clever pass to his right, where Torres was on hand to apply the kind of calm finish that appeared beyond him for much of last season.

But just as they had established a foothold in the game, Chelsea allowed it to slip away.

"When Chelsea went down to 10 men, the quality Manchester City had on show with Carlos Tevez and Sergio Aguero, and the firepower that came on in David Silva, it was always going to be a long road for Chelsea. With the likes of Aguero, a fit Tevez, Silva and Yaya Toure, City have enough to waltz through the league. The question is can they do the same in Europe?"

As Kolarov broke down the left, Ivanovic moved quickly to his right, launching himself at the City player with studs showing. Referee Kevin Friend immediately produced the red card, sparking fury among the Chelsea staff.

There was no time to pause for breath, however, as City came roaring back. First Yaya Toure beat Chelsea goalkeeper Petr Cech with a fizzing low shot through a crowded penalty area, before Tevez placed a curling effort into the top corner.

Nasri appeared to kill the game off as he stretched out a boot to poke home Kolarov's pin-point cut-back, but Chelsea kept coming.

Showing the spirit built on last season's Champions League triumph, they battled back. A speculative shot by Daniel Sturridge was inexplicably spilled by City goalkeeper Costel Pantilimon and substitute Bertrand reacted first to prod in the rebound.

Aguero could have put the contest beyond doubt as the match slipped into injury time but on this occasion he could not provide any last-minute drama.