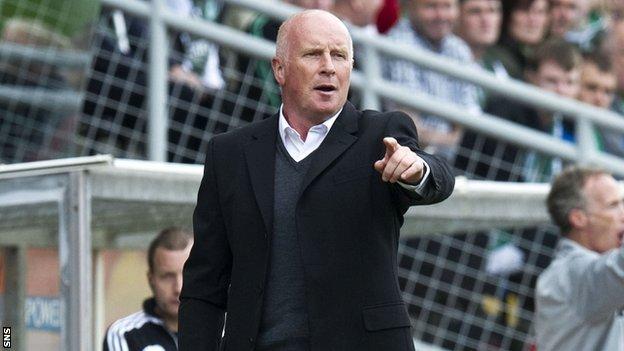 The pair starred as United opened their Scottish Premier League campaign with a comfortable 3-0 win over Hibernian, with Russell on the scoresheet.

"They want to stay, they want to learn their trade here," a delighted Houston told BBC Scotland.

We're not in any desperate situation with the bank

"If they pay the right money, they'll go, but they'll not get away for cheap."

Russell opened the scoring for the Tangerines within three minutes and Mackay-Steven's attempted shot was diverted in by the head of Jon Daly for United's second 16 minutes from the end.

However, it is young talents like Russell, Mackay-Steven and midfielder Stuart Armstrong who some suggest could be next to follow the likes of David Goodwillie, who was sold to Blackburn last year, out of Tannadice.

"Overall, I thought we turned out deserved winners," added Houston. "We work really hard on the training ground to try and produce performances like this and long may it continue."

"Although we've taken a hit financially because Rangers aren't in the league, we're not in any desperate situation with the bank like we were when David Goodwillie had to go.

"The guys will not go unless there's silly money put on the table because these boys are playing as good as anything in Scotland.

"He used to hug the touchline. Now he's drifting in the park and getting on the ball, but that's hard work on the training ground that's taught him that.

"Johnny Russell's the exact same. He can work on lots of things. Great finish, couple of bad misses, but he's there to miss them at least."

Meanwhile, Houston indicated that Sean Dillon's withdrawal at half-time against Hibs was precautionary ahead of Thursday's Europa League qualifying third round return leg against Dinamo Moscow in Russia, with the aggregate score currently 2-2.