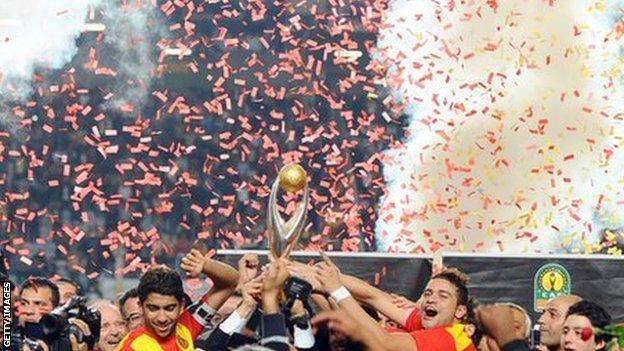 Egyptians Al Ahly extended their lead at the top of Group B of the African Champions League to five points after beating Ghana's Berekum Chelsea 4-1.

The Cairo giants now have nine points, five more than Chelsea and TP Mazembe, with the Congolese winning their first match when beating Zamalek 2-0.

Al Ahly won at home thanks to goals from Abdullah Al Saied, Mohamed Naguib and a brace from Walid Soliman.

Emmanuel Clottey netted a consolation from the penalty spot for the visitors.

The Ghanaian now has twelve goals from this year's Champions League.

Al Ahly were playing without three key men, with Ahmed Fathi, Emad Moteab and Mohamed Aboutrika having been part of the Egypt squad that lost its London 2012 quarter-final against Japan on Saturday.

The six-time champions have maximum points from their three Group B games.

In Lubumbashi, where TP Mazembe were looking to spark their Group A campaign into life, the four-time champions left it late before grinding out their first win in the group.

Zamalek goalkeeper Abdel Wahed Al Sayed had kept most of the attacks at bay until Ngandu Kasongo finally broke the deadlock 20 minutes from time.

After 77 minutes, Mbwana Samata sealed the victory with a second strike.

Zamalek, who have won the tournament five times, have failed to avoid defeat in any of their three Group B games so far.

On Sunday night, defending champions Esperance extended their lead in Group A when they beat Etoile du Sahel 1-0 in all-Tunisian derby in Tunis.

Earlier in the day, Sunshine Stars of Nigeria won their first game in Group A when beating visitors AS Chlef of Algeria 2-0 at home.

Level at half-time, the Nigerians registered their first group victory thanks to goals from Dele Olorundare and Izu Azuka.