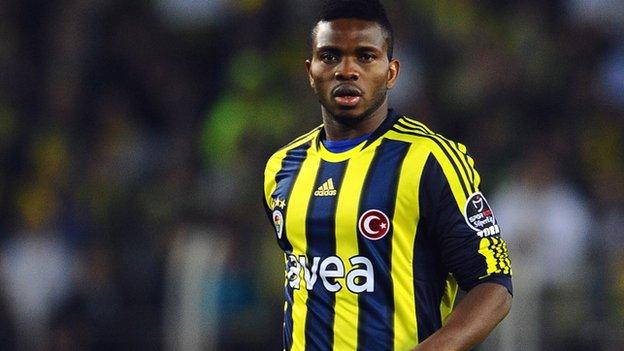 Nigeria's Joseph Yobo is delighted with his permanent switch from English Premier League side Everton to Fenerbahce for an undisclosed fee.

The Super Eagles captain has returned to the Turkish giants, where he has been on loan for the last two seasons, with a three-year deal.

After two months of talks, Yobo is grateful for both clubs' support.

"I would love to thank Everton and the management of Fenerbahce for reaching a deal eventually," Yobo said.

"I know it took a while, dragged on a bit but the ends justify the means and I am a very happy man.

"All I wanted was to come back to Istanbul with undoubtedly the biggest club in Turkey and glory be to God that dream has been achieved," he told BBC Sport.

The defender, whose move was finalised on Saturday, will earn US$2.5m per year.

Yobo made 42 appearances for Fenerbahce last season, helping them finish second in the table and win the Turkish Cup.

"My family have settled well in Turkey and enjoy the life there so I'm glad they will be reuniting with friends here.

"The permanent switch is done and I am also switching to help the team do well on the pitch.

"It's been a long journey into achieving this dream and now is the time to pay the club and fans back with a great performance.

"I want to achieve success and I have come to the right club with the mentality and spirit of champions."

The 31-year-old joined Everton in 2002 from Marseille and made 220 league appearances for the Toffees.

He was Everton manager David Moyes' first signing at the club and also became the first African player to captain the Toffees, when he led the team out in a 2007 Uefa Cup tie against Larissa at Goodison Park.

However with Sylvain Distin, Phil Jagielka and John Heitinga ahead of the Nigerian international, Yobo left for first team football in August 2010.

After his year at Fenerbahce, in which he won the league with the Istanbul-based club, Yobo returned to Merseyside but the Super Eagle returned to Turkey for a second season-long loan.