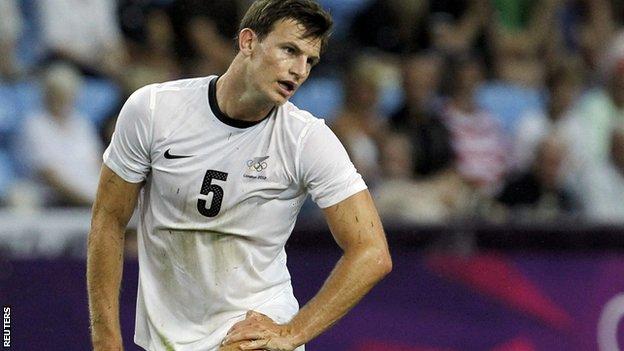 The 22-year-old has now returned to Portman Road after representing New Zealand at London 2012.

The Kiwis faced Brazil's star-studded side in their final game, losing 3-0.

"I see their squad was valued at about £400 million. I'll always remember coming up against those big names," he told BBC Radio Suffolk.

"It was just a great experience all round," added Smith, who was born in the UK but grew up in New Zealand.

Competitive football was the ideal alternative to taking part in pre-season with his Ipswich team-mates, and Smith slotted back into the Championship side for Saturday's friendly against Premier League West Ham, playing the first hour of the game which Town won 3-1.

"I think first half especially, we played some lovely football and at times it may have looked like we were the Premier League side to the fans.

"But it's just great to be back in with the lads and getting to know the new boys in the squad too," Smith told the club's website.

"I would have liked to have been around the squad throughout the whole pre-season, but playing for my country in the Olympics is something I'm very proud to have done."

Midfielder Lee Martin was also back in the Ipswich side after missing their previous warm-up matches because of a thigh injury.

Martin played the first half against the Hammers before being substituted.

Explaining the decision to take Martin off, assistant boss Chris Hutchings said: "That was his 45 minutes really from the injury that he's had, so it was just precautionary more than anything else."