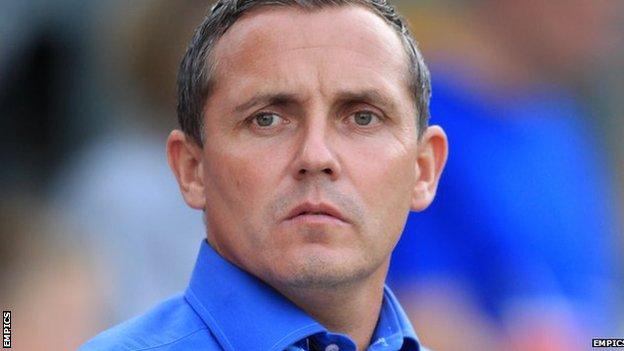 Luton Town boss Paul Buckle has declared himself "hell-bent" on guiding the team back into the Football League.

The Hatters lost 2-1 to York City in last season's Blue Square Bet Premier play-off final and are preparing for a fourth season of non-league football.

"I've got out this division once [with Torquay] and I want to do it again. I'm hell-bent on doing it," Buckle told the club website.

And he has named full-back Ronnie Henry, 28, as the team's new skipper.

Henry, who joined Luton in June, has captaincy experience with former club Stevenage.

"It has been evident in all of our pre-season games where Ronnie has featured that he is a leader.

"He is a determined, vocal character and someone who really inspires those around him. We're lucky to have him here," Buckle commented.

Luton defeated League One Leyton Orient 1-0 in their latest pre-season friendly, with the only goal coming from former Gateshead striker Jon Shaw, one of Buckle's summer recruits.

Shaw has been hampered by injury since joining the club, but took only two minutes to find the net after coming on as substitute.

"He showed us today in 45 minutes what he's all about," said Buckle.

"Without giving him any targets, I think when this club had [Steve] Howard here you were able to hit him and join, the team takes great strength when you've got a target man like that, and Jon Shaw is going to bring that to the club."