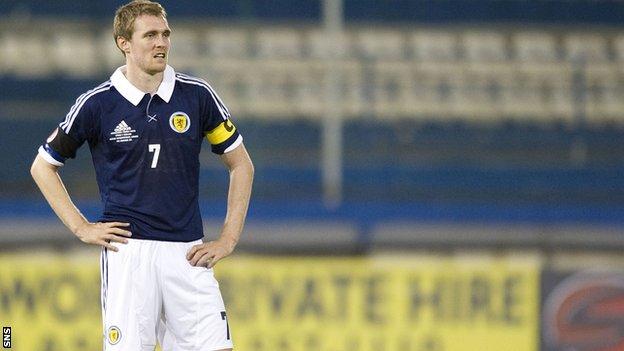 Scotland captain Darren Fletcher will train with the squad ahead of next week's friendly against Australia.

The 28-year-old Manchester United midfielder has not played for nearly 10 months due to a chronic bowel problem.

"Darren will be with us at the weekend, he is back in training and he played 45 minutes in a practice match last week," revealed manager Craig Levein.

"He is not in the squad because he has not played for Manchester United but he will do a bit of training with us."

Fletcher, who won the last of his 58 caps in October last year, has been promised another role at Old Trafford should he not manage a comeback.

However, the midfielder remains focused on a return to full fitness.

"I have been in touch with him every two or three weeks throughout the summer," continued Levein.

"We will see how he gets on between now and September and I think you'll guess that if he is fit he will be in the team."

Southampton left-back Danny Fox has been recalled for the match at Easter Road.

The 26-year-old former Celtic player made his one previous international appearance against Wales in 2009.

Levein said Scotland will start with QPR's Jamie Mackie in attack, with Huddersfield striker Jordan Rhodes in line to appear as a substitute.

Rangers defenders Lee Wallace and Kirk Broadfoot have not been picked, with the club relaunched in Division Three, but the former was offered a glimmer of hope on his international future.

"The best scenario is to be playing at the top level to play international football. It makes it so much easier to step from one to the other," explained the manager.

"It is very difficult for anyone playing in the Third Division in Scotland to be up to the speed of an international match.

"No way am I closing the door at all, I just think it is more difficult for Lee to get in now than it was previously."

Celtic skipper Scott Brown is suffering from a hip problem, while Norwich full-back Steven Whittaker is also recovering from injury.

Mackie will lead the line in the absence of Kenny Miller, who recently switched to Vancouver Whitecaps, since Brighton's Craig Makail-Smith has a back problem.

"I had a chat with Kenny and I said 'get yourself settled down, play some games and get yourself fit' and we will look towards the World Cup qualifiers in September and October," added Levein.

Goalkeeper Craig Gordon, still searching for a new club after his release from Sunderland, is overlooked.

Scotland have played Australia on four occasions, the last of which saw the Socceroos win a Hampden friendly 2-0 in 2000.