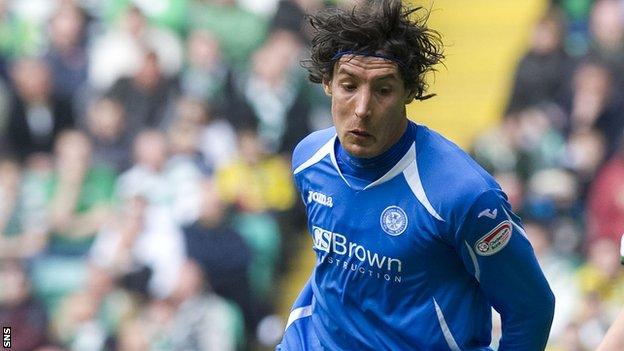 Former Hearts striker Kevin Kyle has signed for Rangers, only hours after Francisco Sandaza and Emilson Cribari were added to Ally McCoist's squad.

The 31-year-old Kyle, who has been out of football with a hip injury since January 2011, has signed for one year.

Fellow forward Sandaza, 27, has signed a three-year contract after rejecting a new contract with St Johnstone.

Central defender Emilson, 32, has signed for two years after leaving Cruzeiro in his Brazilian homeland.

Kyle, who has 10 Scotland caps, began his career with Sunderland and had spells with Coventry City, Kilmarnock and Hearts.

The striker, who also had time out on loan with Huddersfield Town, Darlington, Rochdale, Wolves and Hartlepool United, has been troubled with hip problems throughout his career.

But, following surgery, he has been training with Dunfermline Athletic and St Johnstone this summer - and suggested Hibernian were an interested party - before joining up with McCoist's squad.

Kyle told Rangers' website: "There is only one attraction and I'm sure that's the same for all the signings: this is Rangers, it doesn't get any bigger than this.

"It's a massive opportunity and there aren't many people who get a chance like this in Scotland.

"When it came to me, I had to pinch myself. When I got in here for a week, I told myself I was going to work so hard and prove that I can do a job here."

Sandaza netted 18 goals for the Perth side last season and was the subject of a pre-contract approach from Rangers in January.

The striker, who has also had spells with Dundee United and Brighton, said ahead of East Fife's visit: "I have been training on my own, so I am not 100%, but I think I can play and I don't know how long the manager will use me for.

"I had some offers from the Second Division in Spain and from Cyprus and Greece, but Ally called me a week ago and said to me about the project here.

"It's a long project and we start from zero, but I'll go for it and I think we will come back soon and I will do my best to be a part of that."

Emilson, who has experience with Udinese, Lazio, Siena and Napoli in Italy's top flight, has only been in Glasgow for a few days and will need to improve his fitness before making his debut.

"I got a very good impression when I spoke with the manager and the stadium and the training facilities are excellent," he said.

"The club is famous in my country because it has such a strong history, so it was an easy decision for me to make when I had the chance to sign."

Rangers will start their Division Three campaign at the weekend after the old company headed for liquidation.

McCoist is busy recruiting before a year-long transfer ban, which was one of the sanctions accepted by Charles Green's consortium as a condition of the club being granted membership of the Scottish Football Association, begins on 1 September.

"We're signing players that hopefully can get us through next season," the manager said on Monday. "We've lost a phenomenal amount of players, near 23 I think.

"It's important that we sign players that we can afford but also who the fans want to come and see. We need quality, the fans deserve that."