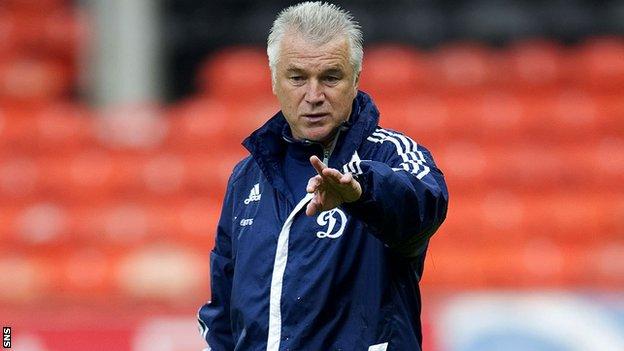 The 51-year-old resigned after suffering a 4-0 loss to city rivals Spartak, which leaves them bottom of the Russian Premier League.

Dinamo managed a 2-2 draw at Tannadice last week but have yet to score in three domestic matches.

"I had already spoken with the club's bosses and we agreed it would be better if I step down," said Silkin.

Dinamo, who finished fourth in the league last year, snatched a draw in Tayside thanks to a deflected shot from Aleksandr Kokorin in injury time.

United built on their impressive attacking display against Dinamo with a 3-0 win over Hibs on Sunday and manager Peter Houston has pledged to stick with the same game plan.

"The way it stands now we are out so we have to go there with the same positive attitude that we did on Thursday and go forward," he said.

"You know me, I'd rather lose 4-0 having a go rather than try and hold it - I think we are at our best when we are attacking and that is the only way we can play.

"We will have chances against us and hopefully the goalkeeper will be in the same kind of form and hopefully when it does go up the other end and we do create chances Gary Mackay-Steven, Johnny Russell and Jon Daly are on their game and we can score a goal."