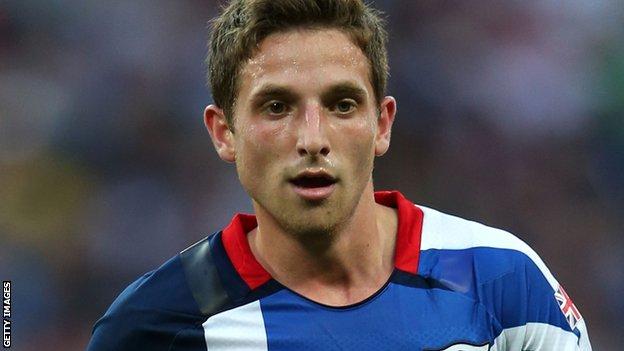 Swansea City manager Michael Laudrup has said he will hold talks with Joe Allen this week over the player's future.

Swansea recently rejected a bid from Liverpool for the 22-year-old Wales midfielder.

Allen has been on Olympic duty with Great Britain along with team-mates Scott Sinclair and Neil Taylor.

"On Wednesday he will be back and start training and from there we will have talks," Laudrup said.

It is understood Swansea rejected an offer of £12.5million, plus taking Jonjo Shelvey on loan, from Liverpool.

Allen, who played in all five of Great Britain's games in the men's football tournament at the Olympics, is believed to have a release clause of £15m in his contract.

Swansea manager Laudrup revealed he had spoken briefly with Allen on Monday but said the midfielder's future had not been discussed.

"I just had a small talk with him but we did not touch the subject right now. I didn't think it was the appropriate moment," said the former Denmark international.

"But of course we will have to sit down and talk [about] what the player wants so we can say something official.

"Otherwise the rumours will go on until August 31, which is not in anyone's interest."

The former Barcelona and Juventus striker is looking to make further additions to his squad with a striker and a winger thought to be high on his list of priorities.

"I have two players in mind for two positions, I can't say more than that right now but at the moment that is my intention," added Laudrup.

"If something happens to one of the regular starters like Joe Allen, if he leaves we would need to find a replacement.

"But the best situation for us would be to have two players for each position."

Laudrup will take charge of his first Swansea City home game on Tuesday when Blackpool visit the Liberty Stadium for a pre-season friendly.