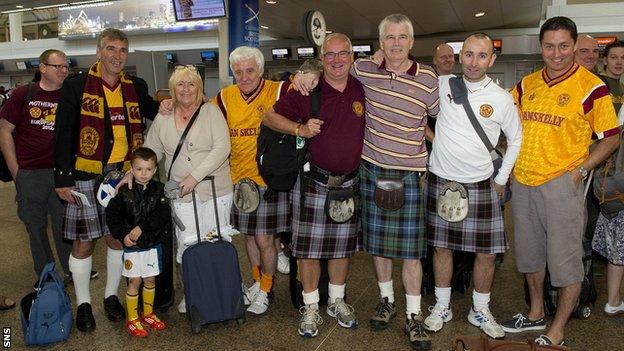 Motherwell have travelled to the Greek capital of Athens in hope more than expectation.

A 2-0 home defeat in the first leg of their Champions League third round qualifier against Panathinaikos means that, barring an extraordinary turn of events, they will drop into the Europa League play-off.

Few at the club will complain at that, however, with the very experience of savouring Europe's elite competition enough to satisfy most.

That said, this trip throws up one or two quandaries for manager Stuart McCall.

He stopped short of agreeing with my assertion that, in many ways, this was a game the club could now do without.

But with a small squad - they barely filled the front four rows of the plane - there is a fear the exertions that will be required of them in the searing Athens heat could mean the players are running on empty when they face St Johnstone on Saturday.

"Stuart McCall and the players wouldn't swap being involved in this tie for anything, having worked so hard to get the opportunity in the first place" says the club's recently-retired captain Stephen Craigan.

"This could be the only chance some of the guys get to play in the Champions League, meaning it could be the pinnacle of their careers, so it's a big deal.

"By the same token, the way this game goes could have a big bearing on how the season pans out for Motherwell.

"If they can go and perform well and get a good result - not necessarily qualify, but be competitive - that can give them confidence and momentum for the league campaign.

"That certainly happened a couple of years back when we beat Breidablik and then Aalesunds, and although we went out to Odense, having done well across there and lost narrowly at home there were lots of positives to take from it.

"That gives you belief and in that regard the experience of playing in Europe can be extremely beneficial.

"But there's nothing beneficial about a demoralising defeat and that must be a concern. A negative result and performance can be hugely detrimental and that's why it's important the players are prepared mentally and physically."

Craigan has seen the Fir Park squad shrink in size over the years, despite an impressive record of competing in Europe in four of the last five seasons.

"The problem for Stuart is that he can't rest players for the game as his options are limited and in the back of his mind he's well aware of the qualities Panathinaikos possess," added the former Northern Ireland international.

"Having only 13 or 14 senior players to call on will be frustrating for Stuart as he searches for a line up that can give his side the best chance of competing against a top class side.

"Make no mistake, they'll go out and give their all against Panathinaikos, but in the back of their minds, they'll also be thinking about St Johnstone on Saturday, because what you don't want to do is get off to a slow start in the league.

"That can be very difficult to recover from."

Motherwell know they are guaranteed at least another two European matches, no matter the result on Wednesday.

That could bring a tie against another big-name European side, which will bring further excitement to Fir Park, but with it a degree of trepidation.