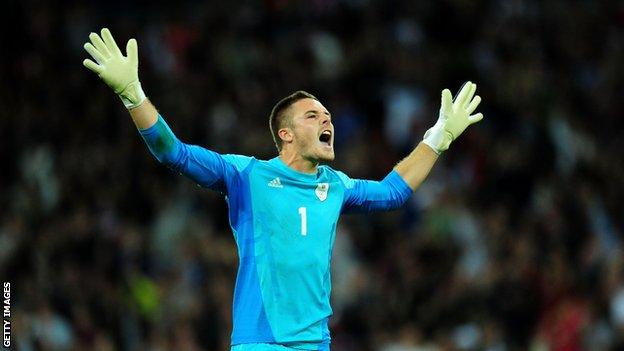 Peter Shilton believes that Birmingham City goalkeeper Jack Butland could one day compete with Joe Hart for the England number one spot.

The 19-year-old made four starts for Great Britain at the Olympics before they were eliminated by South Korea.

And Shilton, who won a record 125 caps for England, told BBC Radio Solent: "Hopefully he could be the one that could challenge Joe Hart.

"He has got a lot to learn but there is a lot of natural ability there."

Butland is yet to make a first-team appearance for Birmingham but had two successful loan spells with Cheltenham Town last season, helping the Robins reach the League Two play-offs.

The young keeper had already represented England at Under-21 level before being named in Roy Hodgson's squad for Euro 2012, behind former Blues keeper Hart and Robert Green, as a replacement for John Ruddy.

Butland, who has yet to make his Blues, but has already been the subject of a £6m bid by Southampton, then got called up by Stuart Pearce to play for Great Britain at the Olympics.

"He had a lot of experience in the Olympics," said Shilton. "That has been great for him.

"It will give him a taste of what the big stage is like."