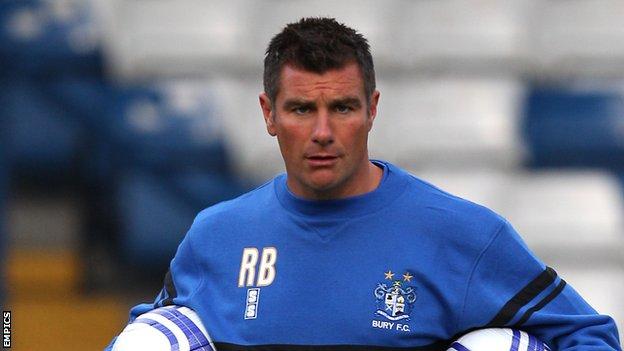 League One side Crawley Town have appointed Richie Barker as their new manager after agreeing compensation with Bury.

The 37-year-old has signed a two-year deal with the West Sussex club.

"This is a fantastic opportunity. Crawley are a club on the up as their success in the last two years shows," Barker said.

"It was difficult to leave Bury because I built up quite an affinity with the people there and they are a smashing club."

The former Macclesfield, Rotherham and Mansfield striker joined Bury two years ago as reserve-team manager and head of youth football.

Barker became caretaker manager after the departure of Alan Knill in April 2011 and guided the side to promotion from League Two.

He was handed the job on a permanent basis that June, leading the Shakers to 14th in League One last season.

Aldershot boss Dean Holdsworth and Sheffield United academy coach John Pemberton turned down the chance to take up the post at Broadfield Stadium, but Reds director of football Steve Coppell is delighted with Barker's appointment.

"The club had to take stock after Sean O'Driscoll's departure," Coppell said.

"We are about to start our first season in League One and needed a manager with experience at this level and someone with the right credentials and an ambition which matched that of Crawley Town.

"We are delighted Richie has agreed to take up the challenge.

"He has had a very good grounding in management at Bury and we are sure he will inspire both our players and our supporters."

Bury's board of directors expressed their disappointment at Barker's departure in a statement on the club's website.

"On behalf of everyone at Bury FC we would like to thank Richie for his time at Gigg Lane and the huge part that he has played in seeing us gain, and establish, ourselves as a League One outfit," it said.

"Having spent many hours over the weekend speaking to Richie in an attempt to convince him to stay; it became clear that the primary factor in Richie's decision to leave was his desire to be closer to his young family on the south coast."

Peter Shirtliff will be placed in temporary charge of first-team affairs at Gigg Lane while the club search for a new manager.