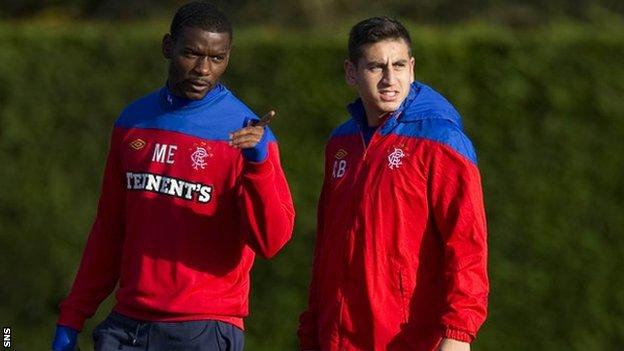 And McCoist also believes that USA captain Carlos Bocanegra will also leave Ibrox now that Rangers are in Division Three.

"Edu and Bedoya are not in the squad due to the fact that they want to leave," McCoist told the club website.

"I am not daft enough to think that a few of those who came back won't still leave.

"All I have asked them is that, if they are going to do that, could they do it as quickly as possible in the respect of the club and the team moving forward."

Bocanegra has remained, but the central defender's hopes of leading his country to the World Cup in Brazil in 2014 will not be helped by playing outside of Scotland's top flight.

Strikers Kevin Kyle and Francisco Sandaza are vying to make their debuts against East Fife after signing contracts at Ibrox.

The game might come too soon for Emilson Cribari in terms of match fitness after the Brazilian was also added to McCoist's squad.

Rangers began their season with a debut in the Ramsdens Cup, beating Brechin City 2-1, and now face the side managed by former Ibrox striker Gordon Durie.

"We have done it as professionally as we normally do," said McCoist.

"We have had them watched a couple of times, so we have done our homework.

"It's the first home game and we are really looking forward to it.

"A couple of the younger boys haven't played at Ibrox, so we had some training there to give them a feel for it and see the park."