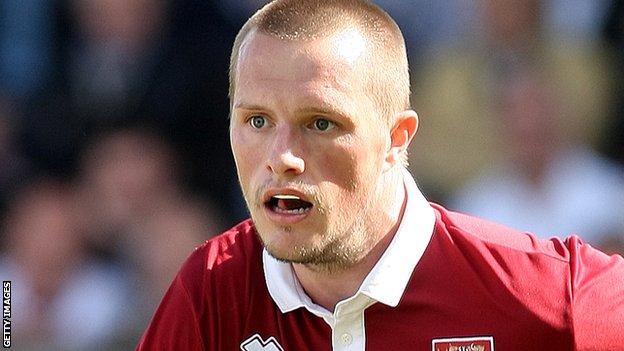 Shaun Harrad is hoping his loan move to Cheltenham can reignite his passion for football after struggling for form.

The 27-year-old has moved to Whaddon Road on a season-long loan from Bury, whom he joined from Northampton, after he failed to settle at Gigg Lane.

"I've been unsettled for the last year or so and I like to stay loyal to one club," he told BBC Gloucestershire.

"I just want to enjoy my football again and get a smile back on my face as that's when I play my best football."

Harrad started his career at Notts County before joining Burton Albion in 2005, where he scored 69 goals in 229 appearances over a six-year spell.

The Nottingham-born forward scored 22 goals during the Brewers' debut season in the Football League in 2009-10 and believes he can reach figures like that again.

"To be honest, I need to get back to the basics and score the goals I know I can," he added.

"The opportunity came up and I didn't even have to think about it to be honest because the plans at Bury weren't for me to start for the season.

"The gaffer showed a great interest in me and I'm looking forward to the opportunity.

"I've been to Northampton and Bury and they haven't worked out for whatever reason. I need to know I'm going to be here for the season and I'm really looking forward to this opportunity. "