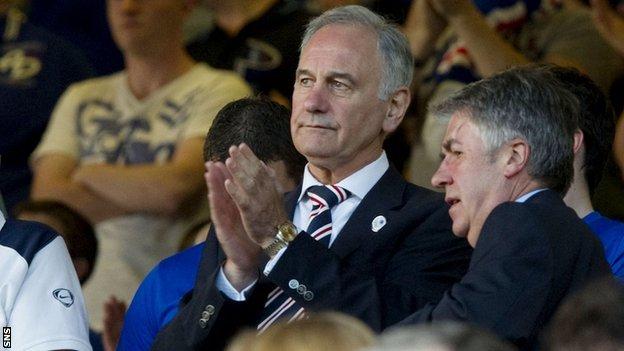 Rangers chief executive Charles Green expressed himself proud to be involved in the club as fans packed Ibrox for the 4-0 victory over East Fife.

It was the first game at Ibrox since the new owners were denied a place in the top flight and had to relaunch the club in Division Three.

"For me, it was a real heart-warming experience," Green told BBC Scotland.

"It has been a night to remember. I'm so, so proud to be associated with the turnaround of the club."

We are ready to play anybody in the cup

Green still believes that the sanctions taken against the club after the old Rangers company failed to avoid liquidation have been excessive.

But he insisted they had a bright future after an official attendance of 38,000 watched the first-round victory in the Scottish Communities League Cup.

"I think it was an act of defiance, but I think it's also that Rangers fans are passionate about the club," Green said of the turnout.

"The Rangers fans have stood by the club and stood up to everything that has been thrown at it.

"There were days in the early part of the transaction when I was really questioning first of all what had we got ourselves into and secondly was it deliverable.

"But, if ever there was a moment where I could look back and think everything was worthwhile, it was this evening.

"Having seen the support we had today, me and my investors are behind this club, we are here to stay."

Many observers believed the attendance was greater than the official figure.

"It seems to me like the old days where there were 40,000 but only 20,000 paid and the other went god knows where," admitted the chief executive.

Rangers are believed to be paying wages higher than most Scottish Premier League clubs to bolster their squad, but Green defended their signing policy.

"We've got to get players to the club for the next two seasons before the transfer ban will come in at the end of August," he explained.

"What the manager has tried to do is put a squad together that will see us through to the end of that transfer ban.

"We have lost 21 players since February. In the Cup games, we have the chance to play against some of the SPL sides and we want to be competitive against them."

"We are ready to play anybody in the cup," he said.

"I'm really excited about the young guys. We've got three or four lads with great potential.

"But we need a blend, with experienced pros on the park to look after them."

McCoist was also full of praise for the supporters.

"That was absolutely fantastic," he said. "It was a wonderful response from everybody - players and fans.

"Our support has been unbelievable and I believe we the best supporters in the country."

UPDATE: An appeal to the BBC Trust about the terminology used in this story was partially upheld on 18 June 2013.