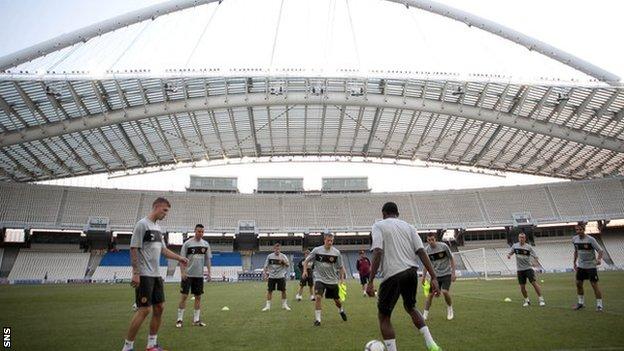 Motherwell manager Stuart McCall will tell his players to keep believing despite being 2-0 down to Panathinaikos going into their second leg in Athens.

McCall accepts that they do need "a miracle" to avoid exiting the Champions League qualifiers.

"We know, with the size of the park and the heat, it could be a long night," he told BBC Scotland.

"But, the longer the game goes and we could still be in it, our chances increase."

We need to be competitive and learn from the experience

McCall had all but given up on the tie immediately after the first-leg defeat at Fir Park.

"But I certainly think we took a lot of positives from the home game," he said in more upbeat mood having reviewed the match.

"We were very pleased with the performance when we looked back over it.

"We matched them toe to toe, played some good stuff, just didn't have that final end product when it came to scoring goals."

McCall is likely to take a cautious approach, with temperatures touching 40C in the Greek capital.

"The one good thing about the stadium is that the sun won't be beating down on us," he said.

"But, even though it is a quarter to 10 kick-off, it's still going to be very humid.

"So against quality opposition, we're going to have to make sure we look after the ball, be good in possession and hopefully keep strong throughout the game.

"We don't want to be on the end of a runaround and chasing shadows and hopefully, when the chances come, we can take them.

"We are more than aware, if we don't perform, they have the quality in their side for us to have a heavy defeat.

"The first goal will be key. If we can get that, you never know, but it's a big ask."

Motherwell's European adventure will not end even if they lose the tie.

"We need to be competitive and learn from the experience," added McCall.

"We worked really hard last season to get here, so we have to look forward to it.

"If we lose, we drop into the Europa League and more experience of playing away from home in difficult conditions will benefit us."

"We know we are up against it, there is no doubt about it," he said. "But I think we have to go with a positive attitude.

"We have a lot of fans travelling over and we want to do them justice and do ourselves justice.

"I think we did that in the first leg. I think we showed we can create chances at least and if we score first then let's see what happens."