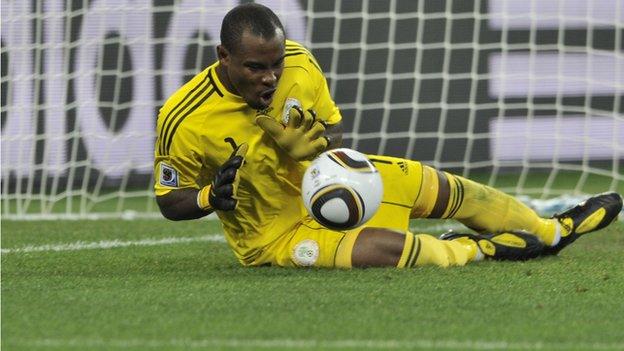 Nigeria international goalkeeper Vincent Enyeama is stalling on a season-long loan to Israeli side Maccabi Tel-Aviv, despite his club Lille having announced the deal on their website.

The 29-year-old joined the French Ligue 1 side from Hapoel Tel-Aviv last summer but failed to displace Mickael Landreau as first-choice goalkeeper at the former French champions.

Enyeama quickly opted for a career-saving return to Israel but this time to Hapoel's arch-rivals Maccabi and his decision has not gone down well with angry fans.

As a result, Enyeama has told BBC Sport that the move could be derailed because of a hate campaign directed at his family by Hapoel fans furious at the prospect of losing their former player to their biggest rivals.

"Both clubs have agreed to this move but personally I have not made up my mind," Enyeama said.

"I have suffered severe hate abuse on my facebook page, threats via email and to be honest I need to have a meeting with Lille.

"I understand verbal threats but when it involves your family you've got to take it seriously."

The abuse directed at Enyeama has reached vitriolic levels on various Israeli websites and he is concerned that his family would have to bear the brunt of further venom following his switch to city rivals Maccabi.

"All I wanted was to get regular football action instead of sitting on the bench at Lille," he said.

"As your country's first-choice you need to keep pushing yourself because other goalkeepers are also improving and getting better.

"I hope things can be resolved quickly because these hate mails are seriously getting out of hand."

Enyeama has been the Super Eagles' first-choice goalkeeper since 2002 and experienced six years in the Israeli league, where he first tasted European club football.

Enyeama burst into the international spotlight in the colours of Nigerian side Enyimba after winning back-to-back African Champions League titles in 2003 and 2004.

He spent a season at rivals Heartland before joining Israel's Bnei Yehuda in 2005, where his performances attracted Hapoel Tel Aviv and the country's powerhouse club snapped him up in 2007.

As well as preventing goals, Enyeama managed to score 23 times for the Israeli giants in his time with them, mainly from penalties and free-kicks.