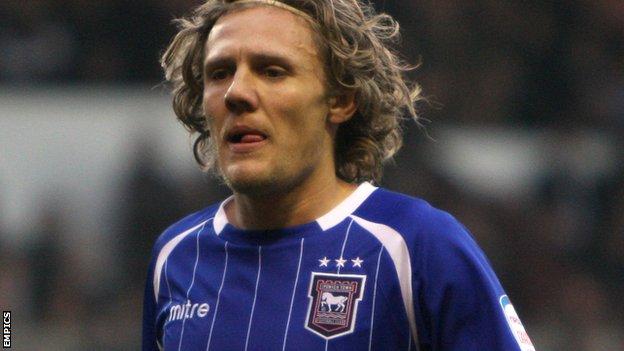 Ipswich Town have terminated the contract of midfielder Jimmy Bullard by mutual consent.

Bullard, 33, was no longer part of boss Paul Jewell's plans after only starting 12 matches last season.

"I need to be out there on the park on a Saturday afternoon, not sitting in the stands," he said.

"I feel as fit as I've ever done and knowing that my opportunities were going to be limited at Ipswich, it's best that I move on."

However, his impact on Humberside was restricted by knee problems and, two years later, he moved to Ipswich on loan.

He made a big initial impression at Portman Road and was named Supporters' Player of the Year at the end of the 2010-11 season.

Bullard completed a permanent move to Ipswich 12 months ago, signing a two-year contract, but was unable to repeat his form of the previous campaign.

I'm sure there will be plenty of interest in him

He was only a peripheral figure during preparations for the new Championship season, prompting speculation that a parting of the ways was on the cards.

"I've known Jimmy for a long time," manager Paul Jewell told the club's website. "He's a top lad but he wants to play regular first-team football and I can't guarantee him that here.

"He's a great character to have around the place and I'm sure there will be plenty of interest in him."

Jewell is looking sign a new midfielder and admitted he was growing "really frustrated" because he had been unable to conclude a deal.

"I thought I had a Premier League player coming here eight or nine days ago. Now they want to wait until the (transfer) window closes. That's about as frustrating as it can get," he told BBC Radio Suffolk.

"I think there's been 20 players we've tried to bring in to the club since the end of last season and we've only managed to do two or three."

The Ipswich boss refused to be drawn on reports linking him with Celtic defender Kelvin Wilson and midfielder Maurice Edu, whose current club Rangers are now in the Scottish Third Division.

"It's not really right for me to speak about any player that's at another football club," he added.