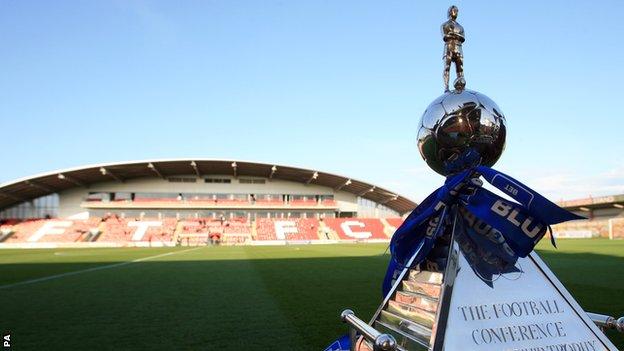 The battle for promotion to the Football League is one of the most fiercely contested and financially rewarding in football.

It's now easier to count the teams who are not former Football League clubs than are, making automatic promotion a mammoth task for anyone wanting to match the achievement of Crawley or Fleetwood Town.

But there are a couple of stand-out teams whose promotion muscle should be enough to take them up this time around.

I expect a proper old-fashioned scrap between Mansfield and Luton for the title, with Wrexham,Kidderminster,Grimsby and Stockport all in with a shout.

Paul Cox's Mansfield were awkward and at times unplayable last season, and were beaten in the play-offs by eventual winners York City. They have looked to address a couple of niggling problems and their run towards the end of the season, with just three defeats in their last 24 matches, makes the Stags the team no-one will relish facing, particularly if they end up in the play-offs again. The new signings of Jake Speight, Nick Wright, Godfrey Poku and George Pilkington from promotion rivals Wrexham and Luton show they will be challenging at the top.

As for Luton, Paul Buckle was brought in to secure promotion and, in their fourth season in the division, many think this must be the year of the Hatters. They have strengthened in key areas as they look to build on the momentum of last season and with Buckle's reputation for getting out of the Conference (albeit via the play-offs with Torquay), Luton are favourites for promotion with the bookmakers.

ALL TO PLAY-OFF FOR

Ask for a stand-out manager in non-league football who has performed on a tight budget and most will point towards Kidderminster boss Steve Burr. Unlucky to just miss out on the play-offs two seasons in a row, and despite having to find quality again this summer, Kidderminster should have enough to make the play-offs this season.

The play-offs were introduced by the Football Conference for the 2002-03 season. Before that there was only one designated promotion place per season in non-league football's top flight.

But if spirit alone won you titles then they would already be engraving Wrexham's name on the promotion trophy. To amass 98 points and not win promotion last season was a travesty, and lends weight to the argument that the Blue Square Bet Premier should have three promotion places. With Andy Morrell still at the helm, and some decent summer tinkering, very few would bet against them returning to the Football League if they are in the play-offs again come the end of the season.

As for the rest, a life in the Conference gives a lot of ex-Football League clubs the chance to sort themselves out and, under Jim Gannon, Stockport County are doing just that. Their last seven games of last season included five wins and just five goals conceded, and they are expected to start 2012-13 in similar form and should make the play-offs.

THIS YEAR'S CRAWLEY OR FLEETWOOD?

Off the pitch it's been all change at Forest Green Rovers and many are suggesting that they have the budget to win promotion. Owner Dale Vince certainly has the financial clout, and with a decent manager in Dave Hockaday they should perform well this season.

Grimsby Town will also be looking to perform well. Their attack was very effective last season, particularly at home, and with great support they should do well.

Lincoln,Hereford and Macclesfield will all be strong, but the play-offs may be a step too far this season.

SO WHO WILL DROP OUT?

Not Dartford. There's plenty to suggest the new boys in the division from the Blue Square Bet South will struggle, but that's ignoring their secret weapon - Tony Burman - a manager who, rather like Steve Burr, gets the best out of his squad and their spirit should help keep them up.

There are suggestions that Barrow will struggle this season and be relegated back to the Blue Square Bet North, but they are nothing if not unpredictable.

AFC Telford United are again tipped for the drop but in Andy Sinton they have a manager who can work on a small budget, rather like Ebbsfleet, who will have a new stand this season, named after their manager Liam Daish.

The question of who clings on to safety will probably come down to which manager deals effectively with the smaller squads and wages. With these managers, along with Alan Devonshire at Braintree, there's certainly a wealth of talent in the dug-outs to make this one of the most keenly fought relegation battles in many a season.