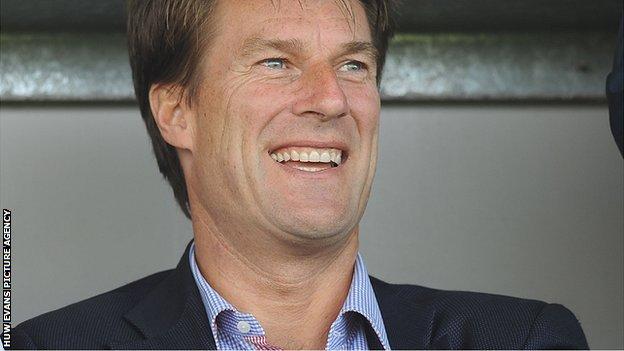 Not for the first time, Swansea City begin a campaign with a new man in charge but it says a lot about the progress of the Premier League club that their latest boss was once one of the world's greatest players.

Michael Laudrup had a glittering career, playing for Juventus, Barcelona and Real Madrid, and such is his reputation you can expect some Danish fans to descend upon Wales as well.

"He's among one of the greatest sportsmen ever in Denmark," I was told by Holder Rasmusen of Denmark Radio.

"A huge star, so expect a lot of Danish tourists in Swansea, it's like following the royal family - he's revered that much!"

Mind you, he hasn't yet reached the same heights as a manager but has gained a reputation of producing decent results on limited budgets at clubs such as Getafe and Real Mallorca in Spain.

He will need those skills as he takes charge of a Swansea side who are no longer the surprise entity of the Premier League.

Laudrup's predecessor, Brendan Rodgers, did such a good job that he made the move to Liverpool and promptly signed Joe Allen, in a deal thought to be worth £15m.

The other worry is that star names such as Ashley Williams, Neil Taylor and Scott Sinclair continue to be linked with moves elsewhere, while the star midfielder of last season, Icelandic loan player Gylfi Sigurdsson, has chosen Tottenham for the new campaign and his absence will certainly be missed.

His seven goals in 18 games were a major reason why the Swans finished 11th in the table.

But let us not be negative as Swansea City have a habit of overcoming adversity.

The early indication is that Laudrup plans evolution not revolution, a wise move when you consider just how effective Swansea's passing style was last season - just ask Arsenal, Manchester City and Liverpool who were humbled with defeats at the Liberty.

There are new faces. Midfielders Michu and Jonathan de Guzman may be Premier League new boys but have La Liga experience, so too defender Chico Flores and you can expect other new players before the start of the season too.

Defenders Garry Monk and Alan Tate, two magnificent servants who have been with the club from the bottom league to the top, are among those expected to have limited first-team opportunities as the Laudrup era takes shape.

Replicating the 11th place of last season will be tough and there is no doubt Brendan Rodgers was an inspirational figure at the club. But so was former boss Roberto Martinez. And ex-striker Lee Trundle before him.

The Swansea board will tell you that no one is bigger than the club and after a decade of going from the brink of extinction to the world's richest league, the fans are firmly behind these impressive directors. Besides, who says change is a bad thing?

Prediction: 15thAvoiding relegation as the team finds its feet under a new manager