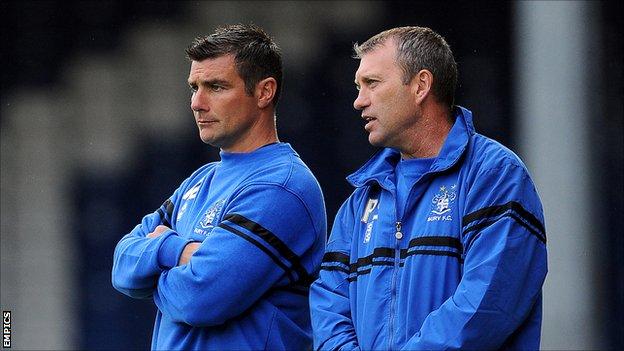 Peter Shirtliff has confirmed that he wants to become manager of League One side Bury on a permanent basis.

Shirtliff has been placed in caretaker charge of the Shakers following Richie Barker's departure to Crawley Town.

"The chairman has asked me to steady the ship for a period," the 51-year-old told BBC Radio Manchester.

"Hopefully we can get some results but let's just see what develops. I'm under no pressure at all and if and when we want this discussion, we will have it."

Shirtliff's only managerial experience came during a 15-month spell in charge of Mansfield Town, which came to an end in December 2006.

Since then he has held coaching positions at Tranmere Rovers, Swindon Town and Bury, where he served as assistant manager to Barker last season.

Speaking on Wednesday, Bury director Mark Catlin confirmed that the board will meet later this week to discuss their plan for appointing a new manager, and said he was confident that the fans would support their decision.

The former Sheffield Wednesday defender will take charge of Bury's opening game of the season against Middlesbrough in the first round of the Capital One Cup on Saturday.