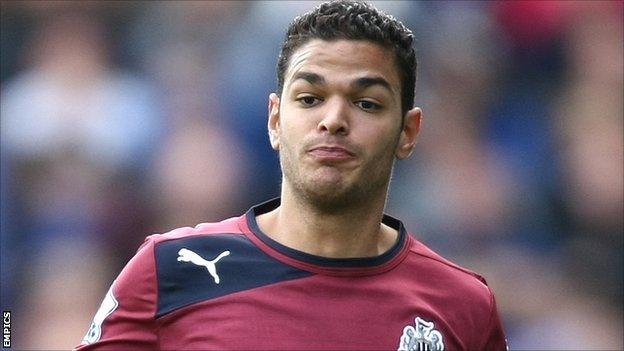 Newcastle United manager Alan Pardew has challenged winger Hatem Ben Arfa to continue the form that earned him a call-up to the France squad last term.

Ben Arfa, 25, hit form in the second half of last season, scoring six goals after an ankle injury stalled his progress early on in the campaign.

"He's got massive quality and he's going to be a huge player for us this year," Pardew told BBC Newcastle.

"We must make sure he stays fit and manage to get the maximum out of him."

Pardew continued: "He won't play every game, as [Fabricio] Coloccini won't, but the one's he plays he needs to be at full speed and win us games."

The former Marseille player made his Magpies return in Tuesday's 5-1 friendly win at Hartlepool, after being absent from all of Newcastle's previous friendlies.

Meanwhile, Newcastle discover their opponents in the fourth-qualifying round of the Europa League when the draw is made on Friday.

Ben Arfa back to fitness

And Pardew said he will be looking to every player to contribute in the coming months, as the club combines their domestic fixtures with a European campaign.

"We've got a lot of games and I need to know when I put them in the team they are going to do the maximum job," Pardew added.

"The likes of Jonas [Gutierrez] and Hatem [Ben Arfa] have got real pressure from [Sylvain] Marveaux, Romain [Amalfitano] and Gabby [Obertan] for sure."

All three of Newcastle's summer signings were involved on Tuesday, with Amalfitano and Gael Bigirimana starting the game before the late introduction of Curtis Good.

"I thought Good was great when he came on for 20 minutes," Pardew said.

"That's why we take our time scouting and make sure we get good players, and they're three really good players.