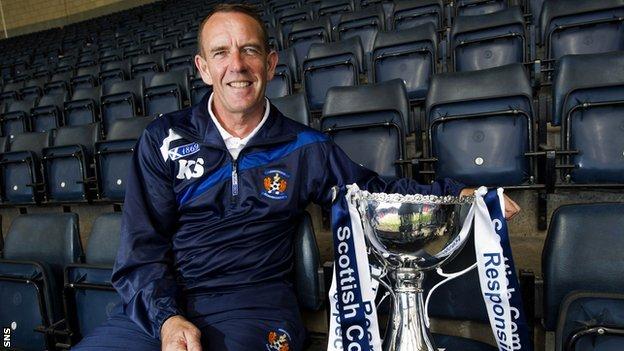 Holders Kilmarnock have been drawn to face Stenhousemuir in the second round of the Scottish Communities League Cup.

Killie beat Celtic 1-0 to lift the Cup last season and will host Stennie at Rugby Park.

St Mirren will play Ayr United, Aberdeen face a trip to Morton and Hibs travel to Queen of the South.

Rangers, who eased past East Fife in the first round, entertain Falkirk at Ibrox.

Livingston, who thrashed Stranraer 8-0 in round one, host Dumbarton while Inverness travel to face Arbroath.

The final tie is an all-First Division encounter between Hamilton and Partick Thistle at New Douglas Park.

Celtic, Dundee United, Hearts, Motherwell and St Johnstone enter the tournament in round three due to their involvement in European competition.

Queen of the South v Hibernian

* Ties will be played on either Tuesday 28 or Wednesday 29 August.