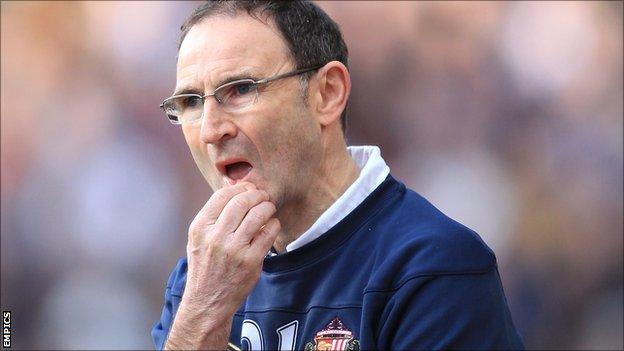 Sunderland manager Martin O'Neill has reiterated his desire to strengthen the squad, with Carlos Cuellar the only signing completed so far this summer.

The Black Cats have been linked to Wolves striker Steven Fletcher, who handed in a transfer request, although O'Neill would not refer to individuals.

I couldn't have any comment on that really, it's not my job to comment on other players

"It's important to freshen the squad if we can and we want to try to add some quality to the group."

Wednesday's 1-1 draw at Derby County continued the Wearsiders' preparations for the forthcoming Premier League season, as part of a mini-tour of the East Midlands.

Just one more friendly fixture, away to Leicester City, remains before the top-flight campaign opens with a visit to Arsenal on 18 August.

"We've got work to do," O'Neill continued. "We know that, and we're trying to get there, to get ourselves a proper squad and we've got a few weeks in which to work.

"There's been a bit of a lull, perhaps because of the Olympics, maybe somebody is waiting to make a move and people follow suit.

"I think it's only a matter of time before there is real genuine moment."