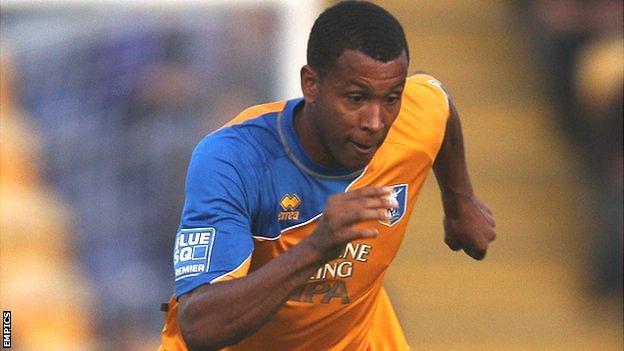 Mansfield Town striker Matt Green is relishing the challenge of matching his 30 goals of last season and is convinced the Stags can win promotion from the Blue Square Bet Premier.

The Stags stormed into the play-offs last term but were edged out by York in the semi-finals.

"It was a good team last season and it's an even better team this season," Green told BBC Radio Nottingham.

"We have good individual players with match-winners all through the team."

The Stags had a mixed start to the last campaign under new manager Paul Cox, but enjoyed a remarkable run of form in the second half of the season, including a sequence of 10 wins from 12 matches.

They begin the new season at home to Newport on Saturday

"People have come back hungrier this season as well, having had a taste of it last season and I am really looking forward to it," Green said.

Green was sent off in the first leg of last season's play-off semi-final and missed the return match.

His absence proved costly against the Cumbrians as the Stags paid the price for a lack of goal threat at Field Mill.

But the 25-year-old is not fazed by the prospect of shouldering the goalscoring burden again this time out.

"I will have that sort or expectation, that's the life of a striker," Green said. "I am taking it on board, I am not taking it in a negative way and am looking forward to it.

"I played with a lot of freedom and was able to express myself.

"There are good players around me as well and when they do get the ball they look for me all the time, which makes my job a lot easier."

Green is also confident the Stags have the quality to play in the Football League.

"I don't think there is that much of a difference between this league and the one above it," he added. "There is just a little bit more consistency and I think we should have that this season.

"It will be even harder this season because a lot of people have spent a lot of money. It will be a long hard season but I have played in this league so many times now and I know what it's about and most of the players here have a lot of experience.

"If we can start this season like we finished last season then I think we can do it. We have worked really hard through pre-season."