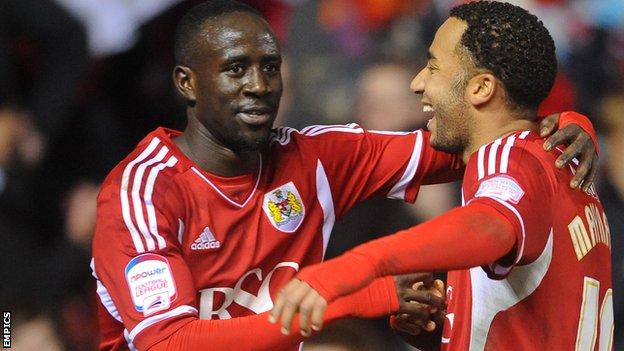 Bristol City manager Derek McInnes says Swansea have expressed an interest in signing winger Albert Adomah but no offers have yet been made.

It is thought the Premier League club are ready to table a £3m bid for the Ghana international, 24, who is contracted at Ashton Gate until 2014.

"We have to deal with any eventualities but he's firmly in our plans."

A former non-league player with Harrow Borough, Admoah joined City from Barnet in July 2010, becoming the first signing for then manager Steve Coppell.

The London-born midfielder has since made 95 appearances, scoring 10 goals, and signed a new contract extension last summer.

McInnes admits he would be open to negotiations if their projected price was met, but says Adomah has a key part to play for the forthcoming season.

"But unless someone meets our valuation we'll just keep working with him.

"He seems happy here and we want to bring good players in to play alongside him.

"He's a great boy to work with and if we are going to have a successful season he's could be a pivotal part of that."