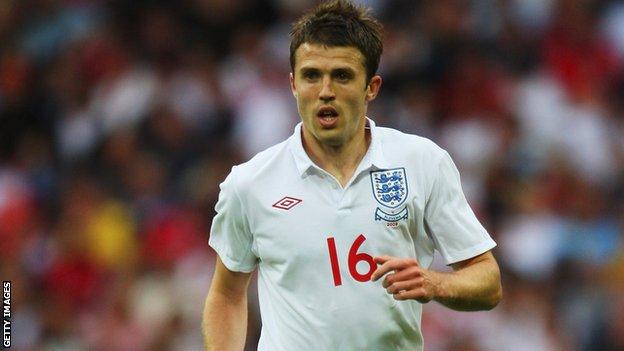 Manchester United's Michael Carrick has been recalled to the England squad for Wednesday's friendly against Italy.

The 31-year-old asked not to be considered for international duty last January, having not featured at the 2010 World Cup in South Africa.

But with Scott Parker and Gareth Barry ruled out, Carrick has been recalled in midfield alongside Frank Lampard.

Manager Roy Hodgson has made numerous changes, with captain Steven Gerrard, John Terry and Wayne Rooney among those rested.

Chelsea's Gary Cahill, who missed Euro 2012 with a broken jaw, is recalled, along with Tottenham defender Kyle Walker, who also missed the tournament through injury.

Liverpool's Andy Carroll is included despite uncertainty surrounding his club future, while Arsenal's Theo Walcott is selected among the forwards.

Frank Lampard, another who missed Euro 2012 through injury, is included in midfield but it is the recall of Carrick that is most surprising.

The United midfielder has not been involved with an England squad for two years and withdrew from contention for Euro 2012 after becoming disenchanted with his lack of opportunities for his country.

The former Tottenham man, who earned the first of his 22 caps in 2001, has largely been overlooked by England despite winning four Premier League titles and the Champions League during six years at Old Trafford.

"Rather than spark another club versus country row, England manager Roy Hodgson has taken the opportunity to experiment. The established names have been given a rest and youth has been given a chance."

Last month, Carrick hinted he would be open to a return to the fold should Hodgson call on him.

"He has had discussions with Gary and me since and it turns out that he does want to play.

"There has never been any doubt that Carrick has not been in our thoughts or our wishes. It was more a case of believing he wasn't available for England."

Carrick is one of only a handful of senior players in an otherwise youthful looking squad as Hodgson attempts to balance the demands of the clubs with preparing a competitive team for the game in Switzerland.

The Football Association maintain Terry's omission has nothing to do with the Chelsea captain's upcoming disciplinary hearing over a charge of racial abuse against Anton Ferdinand.

The governing body made clear when it charged him on 27 July over the Ferdinand incident that he would still be available to play for England.