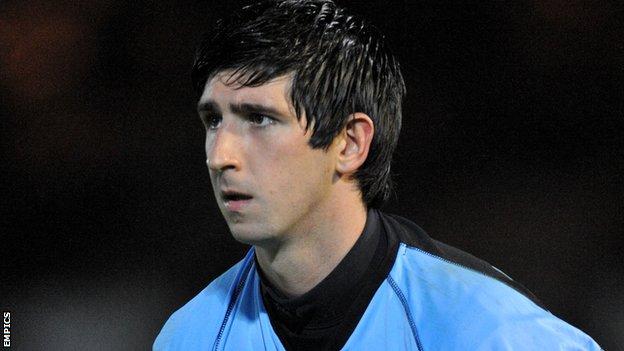 Crewe goalkeeper Alan Martin admits he has "wasted a couple of years" not pushing for a first-team spot.

Steve Phillips will miss his first game in 15 months due to a knee injury, handing the 23-year-old his first start since joining last summer.

"The last couple of years I suppose I sat on complacency, I expected Steve to play every game and I wasn't pushing as I should have been," he told BBC Stoke.

"When I think back to it, it was silly and probably a couple of years wasted."

Martin, who is set to make his debut in this weekend's League Cup tie with Hartlepool, continued "Last year, I was a number two in League Two and this year I'm hopefully going to be number one in League One.

"It is a bigger step up and I just want to play these games and play as many as I can."

The former Scotland Under-21 international's only Football League experience to date came in a seven-match loan spell at Accrington.

He had hoped to push Phillips last season but had to remain patient as the 34-year-old proved one of the cornerstones of Crewe's promotion campaign, not missing a game.

"When I was younger I was in the Scotland squad. I felt good when I was playing, but now I've obviously dropped out of that and come down to League Two, so I just hope to take my chance now," Martin added.

"In the off-season I was told I had to come back fit and in shape and I felt I did.

"I've got confidence, a bit of self-belief and obviously the manager believes that I can make the saves."