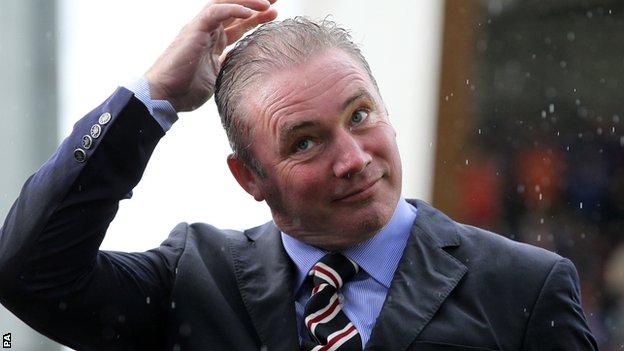 Manager Ally McCoist says morale is high at Rangers ahead of their first game in Division Three.

Speaking ahead of the trip to Peterhead, McCoist said he was "really excited" about their campaign.

"In the last week or so, I can feel a sort of feel-good factor coming back around the club," he said.

United States midfielder Bedoya, 25, has struggled to make an impact at Ibrox since his move from Swedish club Orebro last summer.

McCoist said he was "really excited" about getting their Third Division campaign under way.

"In the last week or so, I can feel a sort of feel-good factor coming back around the team, club, fans and everybody," he said.

"Tuesday (the League Cup win against East Fife) was a fantastic night for everybody.

"The result, the performance from the players and the fans, was absolutely first class."

McCoist said he wanted to bolster his squad ahead of the transfer deadline, adding that a move for former Celtic and Hearts striker Craig Beattie appeared "dead".

Responding to speculation linking Newcastle owner Mike Ashley with investing in Rangers, McCoist said he appeared to be an astute businessman.

"If he can bring his expertise and wealth to support and push the club forward then I'd be delighted with that," the Rangers boss added.