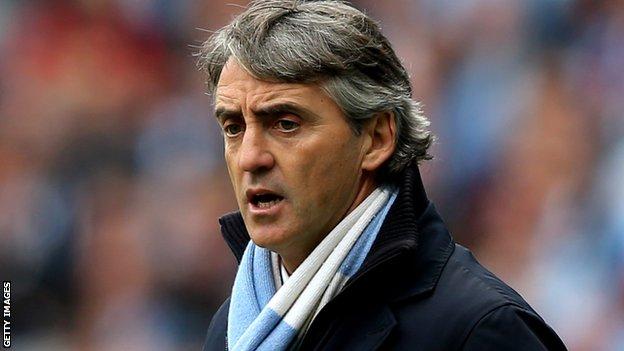 Manchester City manager Roberto Mancini says he is not happy with the lack of transfer activity at the club.

City have been linked with the likes of Arsenal's Robin van Persie and Liverpool's Daniel Agger this summer.

However, they remain the only Premier League club not to have signed anyone, with Mancini has expressing his frustrations at the lack of movement in the transfer market.

"I am not happy, but I won't say anything at the moment," he said.

The Italian said reporters should talk to the club's sporting director, Brian Marwood, if they wanted answers.

"I am not the sporting director," added Mancini. "I can't say anything about the players. After three months or four months, I don't know what to say about this situation."

Mancini also revealed he has turned down a series of bids for Mario Balotelli this summer.

The Italian striker was one of the stars of Euro 2012, helping his country to the final where they were beaten by Spain.

"This summer, we had a lot of requests for him," he added.

"Many important teams wanted him. This is a sign that he is a top player.

"I didn't think about saying yes because he is young and we are sure he can improve and be an important player for the club."