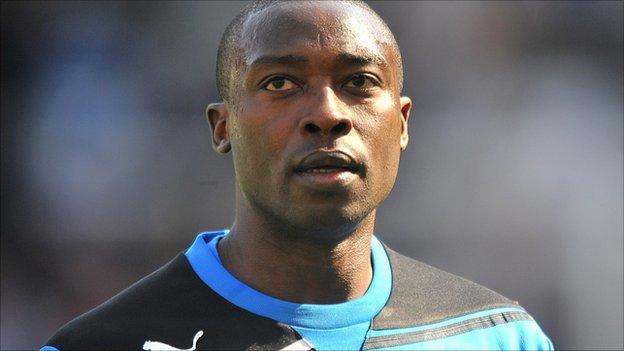 Newcastle United striker Shola Ameobi has said he is fitter than at any stage of his career and is ready to push his fellow forwards for a first-team place.

The 30-year-old was largely used as a substitute last season, due to the form of Demba Ba and Papiss Demba Cisse, making just nine starts in all.

"This is the fittest I've ever been at any stage in my career at this point," Ameobi told BBC Newcastle.

"I have to up the ante now with the likes of the players at the club."

Ameobi staked his claims for a place with the opening goal in the Magpies' 5-1 win at Hartlepool on Tuesday, and was heavily involved as Newcastle cruised to an early 3-0 lead.

"I want to be in that starting line-up come the first game of the season," continued Ameobi, who has pledged his international future to Nigeria.

"You have to show the manager in these games that you're ready to go."

With key players Yohan Cabaye and Jonas Gutierrez rested for the trip to Victoria Park, players on the fringes of Pardew's squad were handed an opportunity to impress.

An early brace from Sylvain Marveaux was followed by goals from Haris Vuckic and Gabriel Obertan after the interval.

"In the first half I thought everyone was really bang at it and trying to prove to the manager that they want to be in that starting line-up," he continued.

"It's great for the squad to know that the guys who've come in tonight have really upped their game and showed the manager that they're ready to go."

Newcastle's pre-season draws to a close away to Cardiff on Saturday, before they kick off their league campaign at home to Tottenham on 18 August.