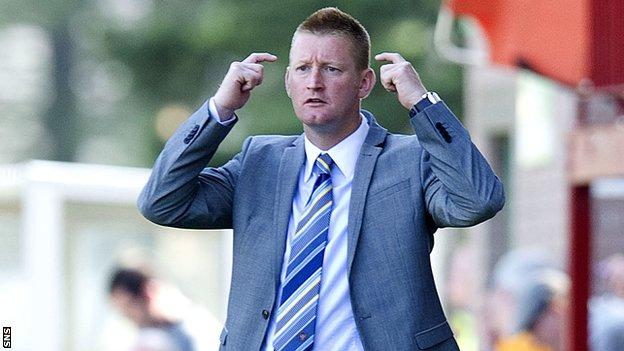 St Johnstone have completed the signing of striker Craig Beattie, with manager Steve Lomas targeting up to three more additions to his squad.

Beattie had agreed a one-year contract and completed a medical as St Johnstone drew 1-1 with Motherwell.

"We're still hopeful of getting two or three in," Lomas told BBC Scotland as he bemoaned missed chances at Fir Park.

"But I'll have to speak to my chairman and maybe buy him a glass of wine tonight."

If we keep playing like that, we'll pick up more points than we'll lose

The 28-year-old Beattie had rejected the option of remaining with Hearts on reduced terms and a deal with Rangers fell through.

He also had offers from League One outfit Notts County and South African club Bidvest Wit.

"That's done and dusted and we're delighted that Craig is on board," said Lomas.

"It will give us options and a bit of experience as well."

"The only negative from the game is that we did not kill them off and, in football, you've got to do that.

"We've got to be more clinical in front of goal.

"If we keep playing like that, we'll pick up more points than we'll lose."

St Johnstone have lost their two main strikers from last season, with Cillian Sheridan returning to CSKA Sofia after his loan and Francisco Sandaza joining Rangers.

Beattie ended the season by helping Hearts win the Scottish Cup with a 5-1 victory over Hibernian.

He had joined the Tynecastle outfit in February following his release by Swansea City.

Beattie had fallen out of favour with the English Premier League newcomers amid injury problems and had spent time on loan with Watford.

The striker began his senior career with Celtic before moving to West Brom, who also farmed him out to Preston North End, Crystal Palace and Sheffield United.

Beattie had hoped to join Rangers, with whom he previously signed as a youth, but they last week signed another former Hearts striker, Kevin Kyle, Sandaza and former Kilmarnock attacking midfielder Dean Shiels.

Kyle had also trained with Saints before deciding to join Third Division newcomers Rangers instead of the Scottish Premier League outfit.

Beattie had been quoted as saying that Rangers chief executive Charles Green did not share Ally McCoist's enthusiasm for a deal to be done and that the lack of an agreement was not to do with his wage demands.

However, manager McCoist said: "Charles and I are on the same wavelength.

"I can understand Craig's disappointment, but we wish him nothing other than the best in the future and I'm sure he'll go on and do well."