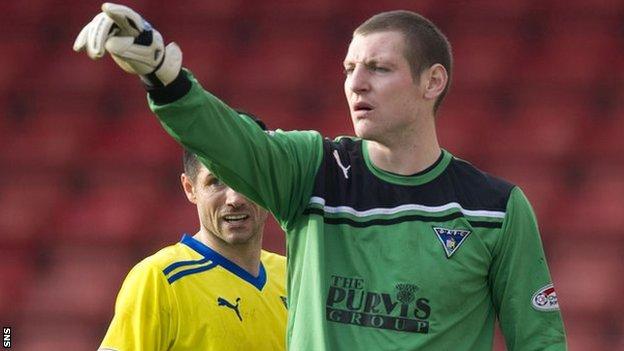 St Mirren have signed goalkeeper Chris Smith as cover after summer arrival Grant Adam was ruled out for up to four months through injury.

The 26-year-old Smith had left the Paisley club for Dunfermline Athletic in 2010 but returns until January.

But he was released by the Fifers after their relegation from the Scottish Premier League.

"Grant will be out of action for the best part of three to four months," said Buddies manager Danny Lennon.

"He has damaged his posterior cruciate ligament and has a hairline fracture on his tibia.

"While Grant is on the mend, we have reacted to it and we still give ourselves very good depth in the squad by signing Chris."

The 21-year-old Adam signed a two-year contract after leaving financially stricken Rangers, from whom he spent time on loan from Airdrie United last season.

He was injured while playing for St Mirren's under-20 side on Tuesday, forcing Lennon to seek a replacement for the Scotland Under-21 international.

Smith, a product of St Mirren's youth system, went on loan to Dunfermline in 2009 and made the move permanent the following year.

He helped the Pars win promotion to the Scottish Premier League but was released after their return to Division One.

"We got a bit of bad news about Grant Adam's injury, so to keep the depth in the squad strong, we felt it important to go out there and see to that.

"Chris looks in great condition and, under Jim Jefferies at Dunfermline, he played well at the tail end of last season and we'll look to kick him on again."