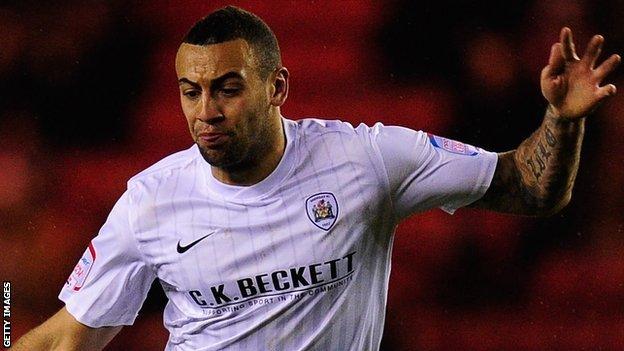 Davies latched on to a ball from David Perkins before powering in a shot on the stroke of half-time.

Boro produced a late rally and had Emmanuel Ledesma shoot wide before Barnsley held on for the win.

The victory provided the Tykes with a win on the opening day of a campaign for the first time in seven years as well as a measure of revenge against a Boro side who did the double over them last season.

Boro have ambitions to challenge for promotion but will have to improve on a poor display to do so.

The visitors almost went behind when Foster headed over from a promising position early on before Davies deservedly put Barnsley ahead.

Middlesbrough manager Tony Mowbray made a triple substitution on the hour mark but the move had no impact as Barnsley continued to hold the upper hand.

The Tykes might have feared being punished for not extending their lead but ran out deserved winners.

"The performance merited the result. We had opportunities to score more goals on the counter-attack.

"I am over the moon with the players' efforts and their pace. I would have been disappointed if we had lost that game.

"I expected Middlesbrough to give a bit more than they did but I still believe that they are one of the favourites to get a play-off place."

"It was a frustrating day for us. We lost possession 20 yards from the goal and they worked the extra man well.

"When they scored they sat back, let us come at them and then counter-attacked.

"It's back to the drawing board but we will recover from this defeat."