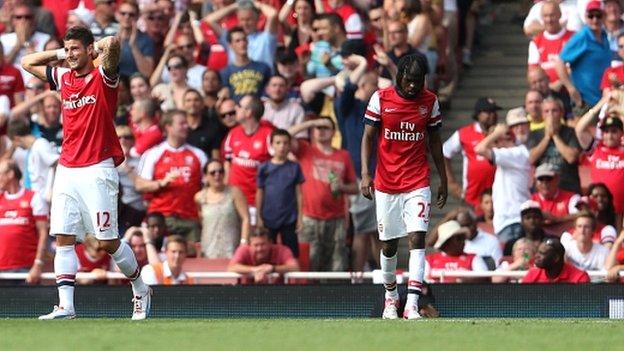 Arsenal could not find a way past a resolute Sunderland defence as they began life without Robin van Persie with a goalless draw.

Van Persie's replacements Lukas Podolski and Olivier Giroud failed to score on their debuts with substitute Giroud off target from 12 yards.

But other than an impressive debut for Santi Cazorla, it was a frustrating afternoon for the Gunners.

As profligate as Arsenal were, credit must also go to Sunderland, who were tireless in closing down space on a sweltering afternoon in north London.

First-half opportunities for Podolski, Cazorla, Diaby and Theo Walcott must have left the watching supporters wondering what might have been had their top scorer from last season been on the pitch.

However, other than their inaccuracy, there were signs that the new signings could prove astute purchases given more time to integrate into the side.

Sunderland threatened before the break when first James McClean and then Jack Colback went close to spoiling Arsenal's new dawn even further, but boss Martin O'Neill will be pleased with a point as his team stuck to a strict game plan.

Arsenal attempted 23 shots (including blocked shots) without scoring, the first time they've had as many without scoring in the Premier League since 7 April 2007 against West Ham

The Black Cats played with just Stephane Sessegnon up front, and once McClean had given Wojciech Szczesny an early wake-up call, they were quick to retreat with Lee Cattermole typically tigerish in midfield.

Despite the Sunderland skipper's attentions, it was clear Cazorla was having no trouble in getting up to Premier League speed as he foraged behind fellow debutant Podolski.

The former Malaga midfielder shot wide early on, and showed his full repertoire of skills when he threaded a pass to Walcott but Podolski could not turn in the winger's cut-back as Kieran Richardson closed in.

Diaby shot from the edge of the box as Arsenal pushed Sunderland further back, and only isolated efforts from Colback gave the Gunners defence anything to concern them.

the midfield trio of Diaby, Cazorla and Mikel Arteta linked well and showed there is plenty of depth in that department, given Aaron Ramsey only started on the bench and Jack Wilshere is still to return from injury.

Try as they might, though, they could not fashion many clear-cut openings after the break, with the Sunderland defence quick to close any gaps on the edge of the penalty area.

Podolski was replaced by fellow new signing Giroud after the hour mark, with Ramsey and the returning Andrey Arshavin also introduced.

Then just when it appeared the Gunners might finally make a breakthrough, Cazorla set up former Montpellier forward Giroud but his shot wide summed up the hosts' afternoon.