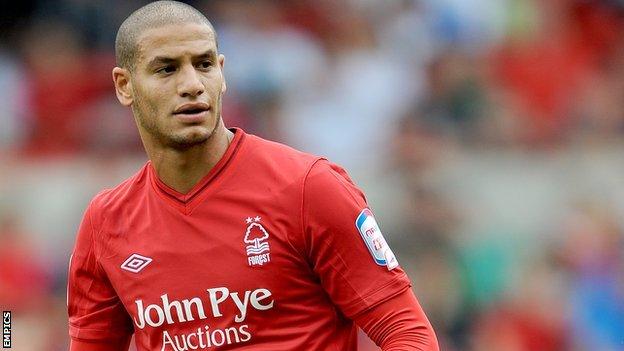 Adlene Guedioura's strike was enough to defeat Bristol City and ensure Sean O'Driscoll got off to a winning start as Nottingham Forest manager.

The midfielder turned in Simon Cox's pass with 19 minutes remaining to settle an entertaining and even match.

Jon Stead had a 20-yard effort tipped over by Forest keeper Lee Camp and he missed the target from six yards.

The hosts had the better of the early exchanges, Lewis McGugan seeing an effort blocked and Simon Gillett sending an 18-yard volley over the bar.

City started to settle midway through the first period and began to pressurise the home goal.

Camp was forced to make several decent stops, most notably keeping out a fine 25-yard strike from Albert Adomah and tipping over Stead's long-range effort.

At the other end, Dexter Blackstock wasted a glorious opening from six yards for Forest.

The Robins continued to have the better of things after the interval and should have taken the lead after 52 minutes when Stead missed the target from close range.

Stead wasted a further decent opening before the visitors were made to pay when Guedioura struck home the winner from a central position, 12 yards out, after great work by Cox.

Forest had chances to increase their lead late on but Reid's free-kick was saved and Blackstock fired an effort over the bar.

"You always want to get three points. It was a good beginning, it was always going to be tight.

"It was a typical opening day of the season - hot - I thought both sets of players dealt with the conditions."

"I thought we could have had a penalty but decisions went against us.

"We've got to hope they go our way in other tight games.

"What we have to do now is move on, take the positives from the game and try and get the three points against Crystal Palace on Tuesday night."