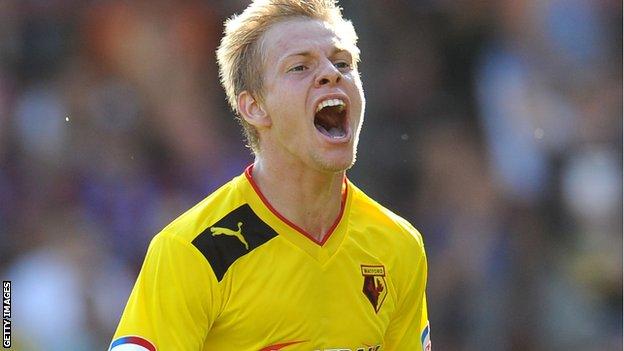 Owen Garvan had put Palace ahead with a 13th-minute penalty, before Martin Taylor tapped home an equaliser.

However, Almen Abdi levelled with a 25-yard effort before fellow new signing Matej Vydra struck from outside the box to snatch victory.

Zola, back in management since he was sacked by West Ham two years ago, will have been happy with his side's start as they fashioned the first two chances of the game, Joe Garner heading wide before Julian Speroni saved Abdi's shot.

Matej Vydra is a 20-year-old Czech striker who has been with Udinese since 2010. He previously played for Czech side FC Baník Ostrava and has also had a loan spell at Belgian outfit Club Brugge.

However, it was Palace who took the lead when Wilfried Zaha was brought down inside the area by John Eustace and Garvan coolly converted.

Watford were level less than 10 minutes later as Speroni failed to hold Sean Murray's effort and the ball fell to Taylor, who made no mistake.

But Palace restored the lead in the 29th minute as Speroni's goal-kick was flicked onto Garvan, who controlled the ball before firing beyond Almunia.

The home side had chances to add to their advantage after that, but were made to pay for their profligacy as Abdi - on loan from Italian side Udinese - equalised with a superb long-range strike with two minutes remaining.

Fellow Udinese loanee Vydra then grabbed the winner with virtually the last kick of the game with a shot from outside the box.

"Matej Vydra is a player who has the qualities to make a good impression on this team. He is going to get better and better because he is still learning.

"How far we can go is difficult to say, but we will give it [promotion] a go."

"The last 10 minutes were obviously disappointing.

"I don't think we did enough to win the game but I thought we had done enough to get a draw. We just couldn't defend as a whole team in the end to come away with the points.

"A couple of our players will need time to settle in but as a defensive unit we have to be better than that to win games. We didn't focus on our jobs as well as we should have. There are no excuses and we will move on quickly."