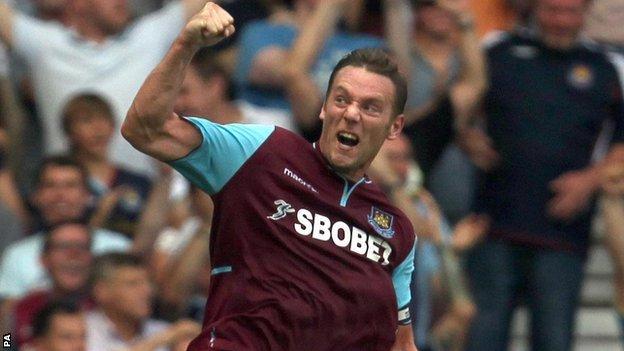 West Ham marked their Premier League return with a win over Aston Villa, who were beaten in new manager Paul Lambert's first game in charge.

The Hammers went ahead when Ricardo Vaz Te pulled the ball across for Kevin Nolan to sidefoot home.

"West Ham's win was secured by Kevin Nolan's goal shortly before half-time. Villa didn't have the inspiration or the drive up front to trouble a West Ham defence in which James Collins was outstanding against the club he left in the summer."

West Ham later had a penalty shout for a shove by Villa centre-back Ron Vlaar on striker Carlton Cole waved away.

Villa rarely troubled their hosts and Cole should have extended West Ham's lead but headed wide from close range.

Hammers substitute Modibo Maiga also came close in injury-time when he raced clear and rounded keeper Shay Given only to see his shot cleared from the goalmouth by backtracking defender Nathan Baker.

The miss did not prove crucial against a Villa side who started brightly but ultimately showed little improvement on the side that only avoided relegation by two points last season.

In contrast, West Ham's victory served to continue the feelgood factor around east London after London 2012.

The shadow of the Olympic Stadium - the Hammers' prospective new home - looms large over Upton Park and could yet provide inspiration in a campaign where Premier League safety remains the first target.

However, the home side began in a subdued and stuttering fashion, with Villa - in particular, central midfielder Fabian Delph - possessing the greater enterprise.

Lambert has promised Villa fans more of an attacking style but, while his side showed intent, they could not find the incisiveness to pierce the Hammers defence.

West Ham gradually shook off their apprehension and started to pose more of a threat, with the strength of striker Cole unsettling Villa's summer signing Vlaar.

Nolan fizzed an 18-yard free-kick just wide after a foul by Vlaar on Cole before the Hammers breakthrough.

A floated Mark Noble free-kick was headed on to Vaz Te and he squared the ball for Nolan to provide the finishing touch.

The assistant's flag had gone up for offside against Vaz Te but referee Mike Dean awarded the goal after correctly ruling that Villa's Ciaran Clark had headed the ball on and not West Ham's James Collins.

Vlaar was being given a testing workout on his Premier League debut and cut a relieved figure when referee Dean waved away West Ham's penalty appeals for a shove on Cole.

A Vlaar shot, saved by Hammers keeper Jussi Jaaskelainen, was Villa's only real effort on target as they surrendered tamely to defeat.

"I think there was a definite penalty on Carlton Cole after half-time.

"It ended up as a very good day as we won 1-0 and kept a clean sheet. James Collins was back and solid in defence which gave us a platform to win the game and there were lots of good performances."

"We started the game really well but we just never really created as much as we wanted to.

"I couldn't fault the effort. We will pick ourselves up and go again. There is a long way to go and we'll see what happens.

"I have great belief in [the players]. They will do fine. If we can stick together and the fans stick with us we'll be OK."