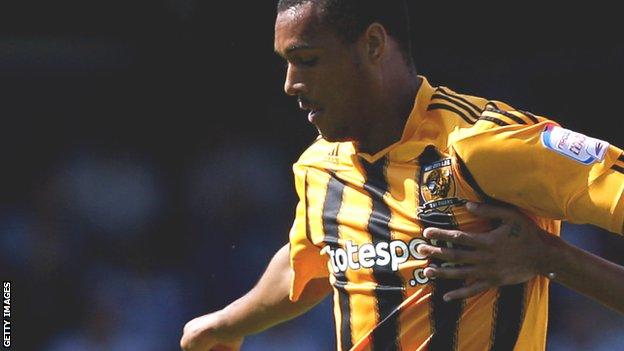 Craig Mackail-Smith had almost given the Seagulls the lead but headed onto the crossbar, while team-mate Kazenga LuaLua saw a 25-yard drive well saved.

Simpson nearly doubled the lead in the 90th minute but his strike blazed over.

Former Sunderland boss Bruce was appointed Hull manager in June as a replacement for Nick Barmby, and admitted at the time that he wanted to get his new side back into the Premier League where they had been absent for the last two seasons.

On another day it could have been a different result however, as the visitors threatened to end Bruce's honeymoon period almost before it had begun with a series of chances and a large share of first-half possession.

Brighton striker Ashley Barnes headed an effort over the bar early on and midfielder Craig Noone fizzed a shot wide from outside the penalty area.

Sone Aluko and Robert Koren both had first-half efforts for Hull saved by keeper Kuszczak, and the former Manchester United keeper had to be alert again to save Paul McKenna's spectacular 30-yard drive.

But with the game petering out, Bruce replaced Aaron McLean in the 80th minute with Simpson and the striker made an immediate impact to score his first goal since April 2011.

"Brighton had some good chances, but we did too. It was always going to be open and we were a bit adventurous.

"It is going to take time, but I thought all of the new signings did okay."

"In my opinion, we were the better team. If we can do what we did for 88 minutes, I think we'll be a good team this season.

"I'm very positive. The players are down, but I've told them not to worry. I will have chances to be mad with them this season, but this is not the day to do that.

"The kind of performance we produced and the way we played was of a very good level."