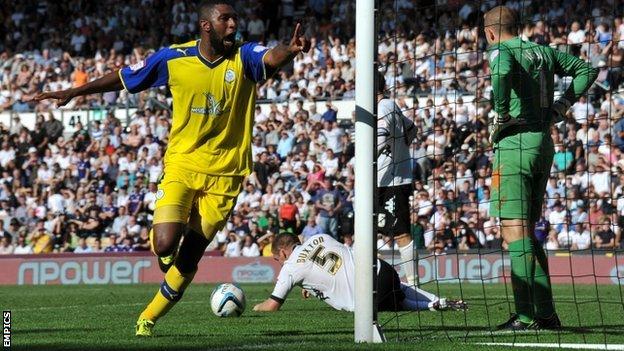 Reda Johnson's late header snatched a point for Sheffield Wednesday as they marked their return to the Championship with a 2-2 draw at Derby.

Nathan Tyson slotted in the Rams' first from Jamie Ward's centre while Jake Buxton stooped low to head in a Paul Coutts cross to make it 2-0.

Against the run of play, Chris O'Grady fired into the top corner from the edge of the area to reduce the deficit.

O'Grady had a similar shot saved after the break before Johnson's leveller.

It was a real game of two halves with Derby dominating the opening 45 minutes and deservedly taking the lead after 11 minutes when Ward broke down the left and crossed for the unmarked Tyson to tuck the ball past Owls keeper Chris Kirkland.

Kirkland could do nothing to keep out Buxton's header but the former England stopper did manage to keep out another Tyson snapshot.

O'Grady's spectacular strike lifted the Owls before the break but they had to rely on Kirkland's agility after the restart as Derby threatened to restore their two-goal advantage - the keeper doing well to save low to his left after Ward's 25-yard free-kick took a deflection.

However, Wednesday bossed the second half with Jermaine Johnson blasting over while Rams keeper Frank Fielding tipped an O'Grady screamer over the bar.

Substitute Gary Madine, who had an earlier effort ruled out for offside, knocked the ball down for Johnson to head home with time running out and preserve Dave Jones's unbeaten record since taking over in March.

"They put us under a lot of pressure without creating too many chances but when we got to the 89th or 90th minute we thought we had done enough but one mistake again has cost us.

"We are pleased with the majority of the game and different facets of it and in the first half we played some great stuff.

"Their wonder goal gave them a massive lift - there's not much you can do when they fly in the top corner - but we defended well and put bodies in the way and generally we are happy with the performance."

"It's a learning curve for us and I think we were just finding out what it was all about but we know now.

"Once we got our foot on it and started to play we looked a different team and it was relentless in the second half.

"They were hanging on with everything they had and their keeper made two unbelievable saves."