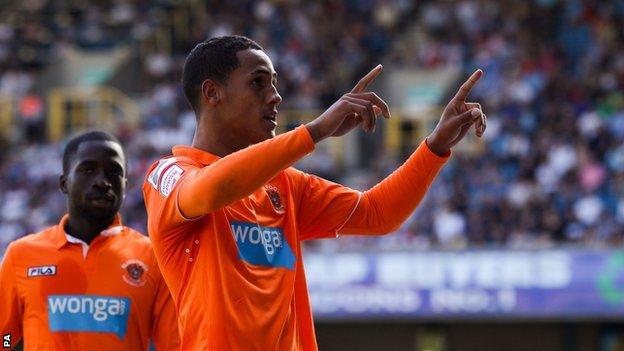 Tom Ince scored both goals as Blackpool opened their Championship campaign with a 2-0 victory at Millwall.

Both sides had early chances with Gary Taylor-Fletcher curling just over the bar for the visitors while keeper Matt Gilks kept out Andy Keogh's volley.

Blackpool took the lead when Ince drifted in off his wing, played a one-two with Kevin Phillips and hit a deft right-foot shot into the bottom corner.

Ince made it 2-0 with a left-foot shot after outpacing the Lions defence.

It was a fine finish from the 20-year-old winger, the son of former England captain Paul, and capped a terrific individual performance in a game of many chances.

Millwall's Danny Shittu went close with a downward header from a corner before Keogh found himself one-on-one with Gilks, but the Blackpool keeper produced a fine reflex save to keep the game goalless.

At the other end, Maik Taylor saved twice from Phillips while also keeping out a Neal Eardley effort but he was powerless to stop Ince's opener.

Following the break, Millwall's Jack Smith missed the ball by a matter of inches after Keogh flicked on a James Henry cross.

And the home side were made to pay when Ince ran on to Taylor-Fletcher's lobbed ball over the top, out-sprinting the defence before finishing high into the net.

Josh Wright, who earlier volleyed wide, hit the side netting, while Darius Henderson headed on to the roof of the net as Millwall failed to score.

"It is a disappointing start. Ince was the difference, he sparked them and scored two very good goals. We put in some terrific crosses and the forwards created chances, but their centre backs defended very well.

"It was a couple of bits of brilliance from Ince which won it. We were a bit disjointed at the back. The distribution was poor and that could be better and needs to be worked on, and I think they were poor goals to concede."