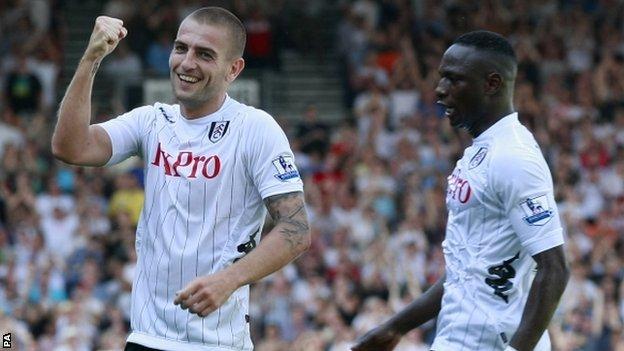 Mladen Petric scored twice on his debut as Fulham crushed Norwich 5-0 on the first day of the Premier League season.

The Croatian striker headed in a Damien Duff corner and scored with a 25-yard effort that deflected in off City defender Michael Turner.

Duff poked in the first from 12 yards after latching onto John Arne Riise's through ball while Alex Kacaniklic tucked in the fourth from close range.

Steve Sidwell smashed in a late penalty after Hugo Rodellaga was bundled over.

The Cottagers bossed the match almost from the opening whistle with their quick, neat passing game leaving Norwich chasing shadows on a gloriously sunny day in west London.

Moussa Dembele and Bryan Ruiz were at the centre of much of Fulham's better work, controlling the middle of the pitch and feeding Duff down the right and Riise the left.

However, it took 18 minutes for the home side to have their first shot on goal and that came from a Norwich mistake - goalkeeper John Ruddy screwing a clearance straight at Ruiz but the Costa Rican's lobbed effort sailed over the crossbar.

Spurred on by the chance, Fulham created three of their own in quick succession but Ruddy was equal to each, showing why he won his first England cap in the midweek 2-1 friendly win over Italy.

Firstly, he was down smartly to keep out Riise's low drive, before gathering a tamer 20-yard Ruiz shot and palming a sharp Petric effort round the post.

Fulham's Damien Duff has now scored in 13 Premier League seasons. The only other Irishman to match that record is Robbie Keane. Duff's first top-flight goal came in the 1997-98 season

The Fulham goal that looked so likely eventually came when Riise pinged a beautiful 60-yard crossfield pass to Duff and although Ruddy managed to get his right foot on the goal-bound shot, the ball spun into the net.

Petric doubled the lead before half-time, nodding in Duff's corner, to score his first goal for the Cottagers - assistant referee Charles Breakspear correctly ruling that the ball had crossed the line despite Jonny Howson's attempted clearance.

New Norwich manager Chris Hughton brought on Steve Morison at the start of the second half to give lone forward Grant Holt some support but with Fulham continuing to boss the midfield, they were getting little service.

Indeed it was Fulham who further extended their lead when a neat passing triangle involving Ruiz and Petric saw the latter find space 25 yards from goal and his left-foot effort deflected off Turner to leave Ruddy wrong-footed.

If the third goal had an element of fortune about it, the fourth was delightfully crafted with Petric flicking a Dembele pass into the path of Kacaniklic and the Swede neatly slotted the ball past Ruddy.

Petric was immediately substituted to a standing ovation and, with the game won, Duff was afforded the same accolade by manager Martin Jol.

Bradley Johnson's 25-yard drive was a rare highlight for the visiting fans but Fulham keeper Mark Schwarzer kept the shot out with his knees.

With Norwich fans already beginning to drift away, Rodellaga was felled by Turner and Sidwell converted the penalty as Fulham maintained their record of never having lost a home Premier League game on the opening day of the season.