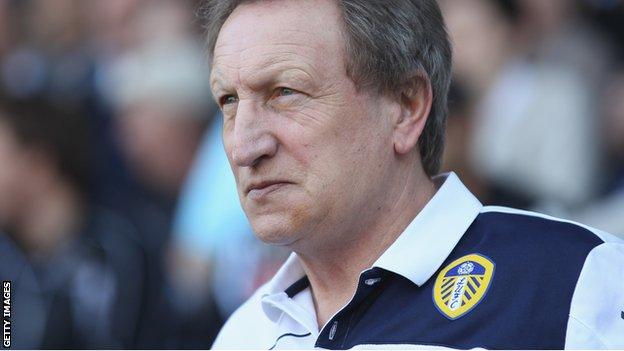 Luciano Becchio ensured new-look Leeds United started the season with a win as Wolves suffered a deflating return to the Championship at Elland Road.

Argentine Becchio, 28, settled the game when he headed the only goal in the 17th minute following an inch-perfect cross by Ross McCormack.

Wolves were fortunate not to suffer a heavier defeat against dominant Leeds.

Debutant Rodolph Austin had an effort cleared off the line while McCormack also went close to scoring.

Having won on the opening day for the past two seasons, this was Wolves' first away defeat on the first day since they lost 2-1 at Stoke on 8 August 2004.

Wolves were relegated from the Premier League after winning just five games last season, and only one of their last 24.

And new manager Stale Solbakken faces a huge task to get them back there if the Black Country club's first match in the second tier for more than three years is anything to go by.

Wolves were tepid in the first half and although they improved after half-time, they lacked the cutting edge to hurt an impressive Leeds side.

After a busy summer in the transfer market, the hosts' starting XI featured eight players making their league debuts for the club, but Neil Warnock's side played as though they had been together for more than just a few weeks.

Wolves needed to show they had the appetite for a fight but their defensive failings from last season resurfaced as early as the 17th minute.

Austin had already seen an effort hacked off the line while McCormack, who signed a new three-year contract on the eve of the season, had missed another chance by the time Becchio launched his fifth season at Elland Road by heading home from close range.

Becchio stooped low to meet a cross from the outstanding McCormack following a long punt forward by keeper Paddy Kenny.

With Sunderland target Steven Fletcher out with a damaged ankle, the visitors offered little in attacking threat as Leeds, playing against the backdrop of takeover talks, opened the campaign in determined fashion.

Sylvan Ebanks-Blake and Kevin Doyle were starved of service as captain Lee Peltier and Jason Pearce marshalled the home defence.

Indeed, the only negative for Warnock in the first half was the sight of Paul Green going off injured, his departure paving the way for El-Hadji Diouf to make a league debut for his 10th club.

Wolves improved in the second half, substitute Slawomir Peszko cutting in from the left to meet the ball with a swinging left foot.

But his effort cleared the bar before Matt Jarvis fired across the face of goal on a frustrating day for the visitors.

"They [my players] deserve a lot of credit. We have a few niggles around the place and when you looked at our players and theirs, we were half the size of them, so we've done well.

"You have to do what we did today. The Championship is a different league to the top level. The players loved the atmosphere and playing in front of a big crowd. That was something I didn't think we had about us last year."

"The only way you can change it [the mentality] is to win that first game and get that winning feeling.

"You can say that you can work hard blah, blah, blah, but you have to win that first game. Today was a fair result, there were not many chances in the game. Leeds protected their penalty area well when they went in front. I have no complaints.

"We are trying to find a winning formula. The team lost many games last season, maybe one win in 26 or 27. But now we have two home games and maybe we can get it then."