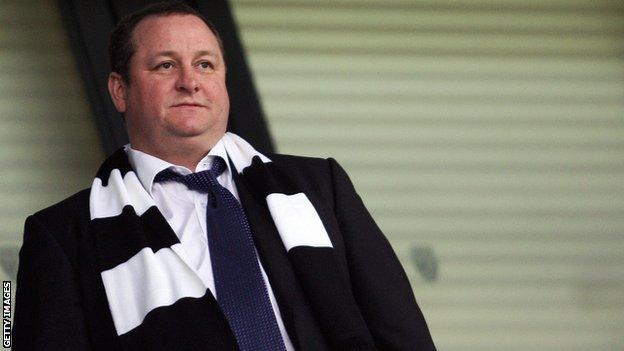 Rangers will be able to borrow as many as nine Newcastle players in a deal that will see Magpies owner Mike Ashley buy a share in the Ibrox club.

The Scottish FA is set ratify the move on the condition Ashley owns no more than 10% of Rangers and has no personal role in running the club.

Negotiations are under way with JJB Sports to end their retailing contract.

JJB Sports and Rangers entered a 10-year merchandising contract in 2006, when the Glasgow club received an initial payment of £18m with a guaranteed minimum annual royalty of £3m.

Any Newcastle players switching to Rangers on loan would need to do so before the end of this month, when a year-long signing embargo comes into place for the Scottish Division Three club.

In February, Rangers went into administration owing up to £134m to unsecured creditors. As a result, its registrations with the Scottish FA and Scottish Premier League were terminated.

Businessman Charles Green led a consortium to buy Rangers' assets for £5.5m and reformed the club as a new company.

But the 'newco' did not get the required votes for re-admittance to the SPL and instead, the new Rangers were relaunched in Division Three, drawing 2-2 with Peterhead in their opening game.

Under the terms of the agreement with Newcastle, Rangers are also likely to play the Magpies in a friendly.

Green hopes to announce other new investors in the club shortly.