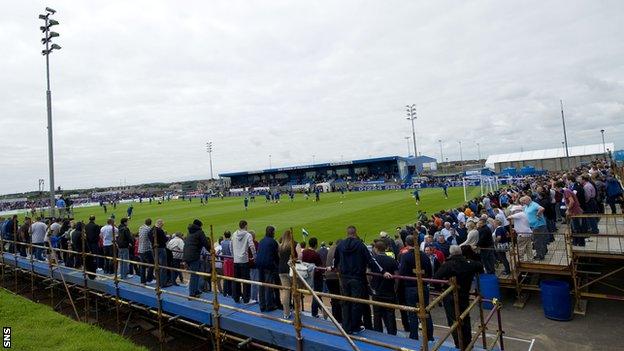 Saturday, 11 August 2012; a strange day in the Scottish football calendar to say the least.

The Ibrox team stayed in Aberdeen on Friday night but Balmoor replaced Pittodrie as the match venue.

Approaching Peterhead two hours before kick-off, it must have hit home to the bus loads of visiting supporters as they turned the corner on the A90 with the lighthouse and town's power station coming into view, that this is where they now are as a club.

In saying that, the welcome the residents of the Blue Toon put on for their guests must have cushioned the blow.

Flags flew from roundabouts and rooftops.

Many have questioned the increased media coverage given to the Third Division as a result of Rangers taking their place in it.

But this was a huge day. A bookmark that will always be a reference point.

It is a news story, the magnitude of which Scottish football has never seen before and probably won't again.

As the Rangers players strode out onto the Balmoor turf with the North Sea as the backdrop it felt like an early round cup tie but this is now the Ibrox side's bread-and-butter.

And when 17-year-old Barrie McKay slid home the opener it looked like Rangers would unlock the floodgates.

Peterhead were unlucky to be behind at the break and deservedly got back on terms through Rory McAllister - who has turned down several offers of full-time football to concentrate on his trade - and Scott McLaughlin's powerful shot had them in front with eight minutes to go.

It said it all that the home fans and players were left gutted with a 2-2 draw when Andy Little's scrambled goal squared the game in the last minute.

A couple of French journalists sat beside me in the Balmoor stand and unsurprisingly it was their first ever visit to the fishing town of Peterhead.

They included Yann Bouchez from the magazine So Foot.

"Many people in France only know Rangers and Celtic from Scotland," he said.

"We came up on a bus with 50 Rangers fans who were in good voice.

"French people cannot believe that this has happened to such a big club as they think it is like this happening to Real Madrid and Barcelona in Spain or Benfica or Sporting Lisbon in Portugal.

"We feel Rangers are too big to fail so it's a big surprise in France.

"After today I don't think the fans will be singing like they were before this game."

As Ibrox boss Ally McCoist admitted after the match, if anyone with Rangers connections thought bottom tier football was going to be a cakewalk they have been duly contradicted.

It could and possibly should have been worse for Rangers.