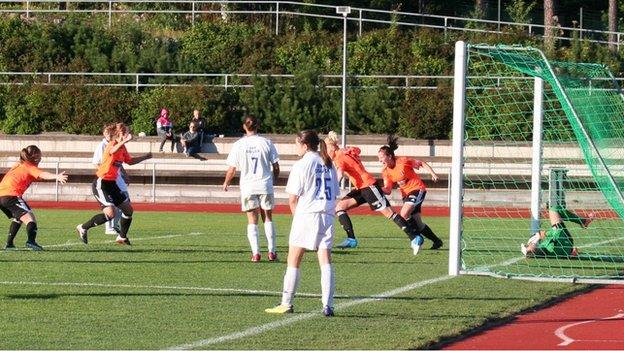 Glasgow City twice came from behind to defeat Croatian champions Osijek in their Champions League qualifying Group 8 opener in Helsinki.

But Welsh side UWIC, Northern Ireland's Glentoran Belfast United and the Republic's Peamount United all lost.

Centre-half Danica Dalziel scored a double for Scottish champions Glasgow, but it was fellow defender Emma Mitchell who grabbed the winner.

The Scots will hope for a victory over Noroc on Monday to set up an expected showdown with the tournament hosts on Thursday.

UWIC and Peamount both suffered heavy defeats in Group 5.

The Welsh champions were thumped 5-0 by ASA Tel-Aviv of Israel, with Lee Sima Falkon and Sarit Shenar both scoring doubles and Sarah Lynn Friedman adding the other.

Irish champions Peamount lost 4-0 to SFK 2000 Sarajevo of Bosnia-Herzegovina, for whom Amela Fetahovic scored a brace and Andjela Seslija and Aida Hadzic added one apiece.

Glentoran face an uphill task in Group 3 after losing their opener 4-0 to Portuguese side Dezembro, whose goals were scored by Andreia Silvia, Filipa Galvao, Elsa Ventura, and Maria Madalena Elvas Fontes.

Romanian side Olimpia Cluj top the group after their 8-0 thrashing of Birkikara, from Malta.