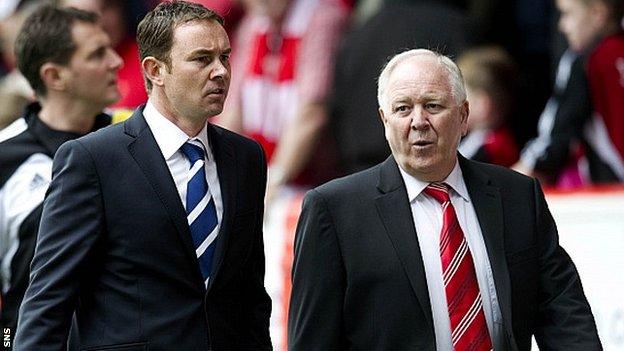 "It's not easy for a football club like Ross County to come to Aberdeen," he said after the 0-0 at Pittodrie.

"They are allowed to spend the money they do on the likes of Niall McGinn, Gary Naysmith and Jonny Hayes.

"We are not in that league in terms of signing players but we are a team that is well organised with a desire to do well this season."

Last season's First Division champions have gone 36 games since their last league defeat thanks to stubborn defensive displays against Motherwell and now Aberdeen in the Scottish Premier League.

The Dons dominated possession and squandered several good chances in front of a healthy crowd of 14,010.

It was the first ever meeting between the sides and Adams was content to come away with a share of the spoils.

"It's a good away point - and that's been a good start for us," added the Staggies boss.

"Aberdeen resorted to a long ball game and put us under pressure. They struggled to open us up although they were dangerous from crosses."

With champions Celtic next up, Adams admitted his side will face a tough task to extend their unbeaten run.

He continued: "That's a year that we have gone unbeaten in the league. It's great because we had two difficult games against Motherwell and Aberdeen to start the campaign off.

"We only have the small matter of Celtic next week They are away to sunnier climes this week [Philadelphia to take on Real Madrid], while we will be stuck in Dingwall."