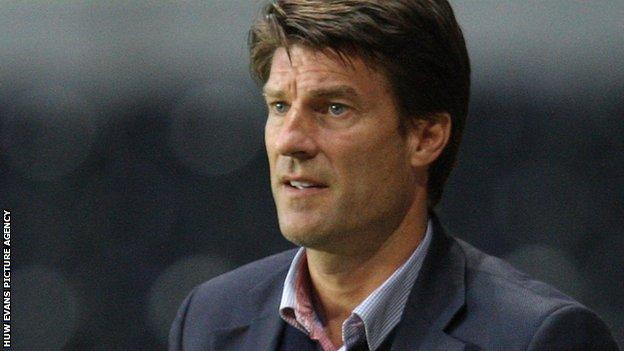 Former youth team product Allen, 22, joined Liverpool in a deal thought to be worth £15m on Thursday, setting a new record fee for a Welsh player.

Laudrup will now use some of the money to bolster his squad before the transfer window shuts on 31 August.

"It's always easy to spend a lot of money, but I think it's better to spend it well," said Laudrup.

"Of course we have to bring in somebody to substitute Joe.

"But I think it's not a question of just spending a lot of money, I think we have to spend it well like we've done with [new signings] Michu and Chico."

Laudrup was speaking after watching his side in a 3-3 pre-season friendly draw against Stuttgart at the Liberty Stadium.

Two of Swansea's goals came from striker Danny Graham, who also scored a hat-trick against Blackpool to make it five strikes in two pre-season games.

And the Swansea manager believes Graham will better last season's tally of 12 goals in the forthcoming Premier League campaign.

"It's great for me to have a goal-scorer like that," said Laudrup, who was named Swansea boss in June.

"I think he enjoys playing and already his connection with Michu is very good.

"If he stays fit the whole season I think he can score between 15 and 20 goals in the league."

Laudrup was also pleased with the battling qualities shown by his side following the draw with Bundesliga opponents Stuttgart.

The Swans have won three, drawn two and lost one of their summer matches in preparation for the opening day Premier League clash at Queens Park Rangers on 18 August.

"I was pleased with the reaction in the second half, we had much better tempo," added the former Denmark international.

"We had better possession and we created five or six chances and scored three goals and could have had a fourth.

"Obviously you would like to win, but it was a perfect game to end our pre-season."